Today we look at the original version of a game that in years to come would lead to a reboot and a few sequels. Upon this games release it received a lot of criticism for being too gory and in some countries the colour of the blood and even the concept was changed to robots and zombies as the idea of mowing down people seemed to explicit. In the UK all of the blood and gore had to be removed before it was even allowed on the shelves! Today we look at the PC game – Carmageddon. 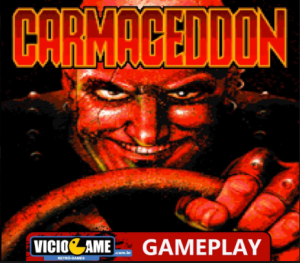 The game was released in 1997 and was inspired by the 1975 film Death Race 2000. The aim of the game is to compete against other cars as you visit various locations to complete each of the races in which you receive points and bonuses for doing crazy things such as driving into opponents cars and running over pedestrians.

The game received negative reviews overall with a lot of places scoring under 5 out of 10. However, despite the poor reviews, the game series has sold 2 million copies in total. One review in particular by the Playstation Magazine stated that all the “pureed pedestrians” could not cover up how many faults the game actually had.

There have been many other sequels to the game and in 2011 Stainless Games obtained the rights to Square Enix Games and released versions of the game for iOS and Android in 2013.

Here is a clip of the game below (be warned, the game does have violence that some may not enjoy / find disturbing)