This week the people that we auditioned to be part of Punders all met for the first time and played scenes together – which was fun to watch how they interacted and how they work together. Again, I am not going to go into too much depth but it is always good to know a brief outline as it justifies why we delved into the world of old Punders games.

We have a huge show in September, so our aim for the next few months is to really get the list of games we want to perform down to a list that we are happy with. We also need some new game as well since we always like to keep things fresh and fun. We played a variety of games but I am only going to run through the highlights of what happened.

If there is one thing that I am very good at then that is messing my words up in a scene. I write a lot for this site and can pretty confidently sit down at a computer ad writing as much as I want but sometimes with improv especially you mind is thinking so  fast that it can mess up your words. This week in the game Sit Bend Stand we were given the suggestion of working as plumbers which ended up being a scene where one of us was a plumber in trainer, one of us was the manager and the other was using the male public toilets. I got the words defamation and defecation mixed up and created the humour in the scene and became a running joke for the rest of the night.

Another game that we decided to play and develop was the Twitter Game that we played at the Launch Pad the other week. Having new faces approach it is a good idea as it means that we can make it something more than it was. When we performed it in front of an audience people responded well to the Twitter character especially so we decided to try it with another character played by Twitter person.

We tried it this time with a different sort of people – reality stars suggestions work really well but we also decided to add politicians to it that were different to the normal ones such as Corbyn and May. One of the suggestions we used was Ed Balls and it worked very well and created humour at certain times.

Another game that we played that went really well was Party Quirks – we play this on a regular basis but again having a number of different people playing it with you means that it can be a fun result. The suggestions that we used this week were vending machine vampire and turning into a rabbit and it worked very well and created a lot of humour for the audience and in the game.

It was a really fun week and look forward to next week to see what happens! 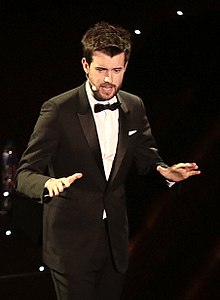 This week I finally got round to watching Jack Whitehall’s stand up comedy Netflix special. I never used to be a fan of Jack but then I watch League of Their Own and it made me laugh so much how they technically bullied him and he handled it so well that I started to like him.

I have watched all of his stand up shows on Netflix and found them very funny and just haven’t goth round to watching the main Netflix one because I went through a stage of watching too many of the specials (predominantly James Acaster ) that I needed a break.

Anyway back to this Netflix special, this really relates to our rehearsal this week because just like myself, Jack got his words messed up on one of his jokes and accidentally revealed the real name of one of his friends that his jokes was about. This ended up becoming one of the biggest highlights of the show because it was clearly a muddle of words and his look of shock and embarrassment heightened the comedy even more.

This week getting my words messed up created a huge humour point of this weeks rehearsal and it is also something that can really make a show. The audience are not laughing at you they are laughing with you in a sympathetic sort of way as they know that you know that you messed up and that is what makes it funnier.  The thing that makes jokes funny and you know that you did a good mess up with words is when someone refers to it later and this happened as it was mentioned in the right way later on in a different scene.