There has been a viral list going around on Facebook this week about telling the world 10 gigs you have been to and one of them is a lie. Well,  we here at Phoenix are going to do ONE better! We are not going to tell you just any gigs but we are going to tell you the 10 best gigs that our editor, aka me, has been to. We won’t be stopping at music though oh no! We are a comedy blog so we are doing one week as the 10 best comedy gigs and then another Week as ten best music gigs! So let’s start with the list which this blog is about – comedy!!!

10 Frisky and Mannish
I remember the time i saw Frisky and Mannish at the Udderbelly on South ank – i was aware of their style of comedy, but was still so impressed with their live shows. They are not just great with the audience they really put on fantastic characters on the stage that make you really dive into their world of pop music and humour. The glitter, the glamour and the comedy really make you experience a comedy show like no other.

If you are a PCD’er of the Elis James and John Robins show then you will probably be at the front line of this gig, if you have not heard of John Robins, then it is time you looked him up or saw him live. His humour is a lot darker then a lot of the acts on this list but do not let that deter you as he puts on a really good show. He is great at interacting with the audience and his jokes are funny and welcome you into the world of Robins.

One of the stand ups I was pleasantly surprised by seeing live was Nish Kumar – I always found him funny when listening to him on radio shows but never thought about seeing him live, however, when i did see him perform his routines in front of an audience I was really impressed about how much he made me laugh. Nish’s comedy is not what you would expect which is why the laughter kicks in because some of the stuff he says is really funny and unexpected punchlines.

If there is one comedian I love seeing live then it is Russell Howard – he is so hilarious and he really knows how to hold an audience’s attention. He is not afraid to improvise and go off course from his routines which makes him one of the Uk’s best loved comedians. He is very funny and physical on stage that really makes him so fun to see live. The more I see him live, the more I want to see him live.

If you are looking for someone who is very funny both on the scereen and off then you really need to see Stephen Merchant live. I remember seeing him and not knowing what to expect as I have only seen him alongside Ricky Gervais, but on his own he is so funny and his stand up show Hello Ladies really was a fantastic gig to go to. He was so funny that I did not stop laughing the whole night and the way that he takes the micky out of himself really did heighten the comedy.

If there is one comedian I am waiting with tight crossed fingers that he becomes one of the UK best comedians, it’s James Acaster. Not because I want him to do Wembley or the O2 (that would be great for him if he did) I prefer small gigs, no the reason I want him to get even bigger is because I want to see him do a 2 hour or so set.
I have seen Acaster live twice and both times you leave wanting more as an hour for his style of comedy is not enough. His humour is all about comedic timing and there is always a gap between the punchline and the leading up to the joke. I adore seeing James live as he is such a great persona on stage and really does make the audience laugh out loud.

I have seen the king of audience banter twice and both times I have left laughed out and with a massive smile on my face. He is so unique on stage and that’s why he is still one of the UKs best loved comedians. His sharp wit, his dead pan face and his posh voice just make him so great to watch. He has been doing the same persona for years and even now it hasn’t tired out, it’s still as great as it was ten years ago.

I remember this gig a lot because we ended up at it by accident. I was heading to Bournemouth for the weekend to visit a friend and I was in Waterloo station waiting for the train asking me friend what she wanted to do that evening. We came across the listing for Greggs gig and phoned up the venue and luckily they had only two tickets that had been returned- two hours later we were sitting in the venue with great seats watching him.
I didn’t know what to expect – I had only seen Greg on the Inbetweeners and didn’t really know what I was going to think as didn’t really know he was a stand up. I was completely blown away, or shall I say “laughed” away. He was so hilarious a completely interesting concept for a show and really stood out as one of my favourites.

2 Whose Line Is It Anyway

It’s not every time you walk away from a comedy gig that you ribs physically hurt – but with Whose Line Is It Anyway – this really did happen – I laughed so much that my ribs physically ached when I left the room. The main thing I remember about this gig was everyone around me laughing so much they were crying and I was as well and I remember finding it very hard to breath as I was laughing so much. If there is one gig that is going to slay you with comedy then Whose Line really is the show you have to see. 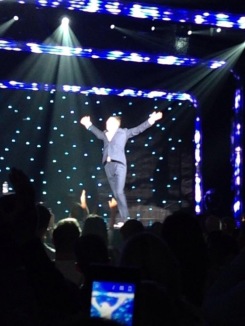 To this day, lee Evans is still one of my favourite comedians i have seen live. There is just so much about him that makes him fit into the fantastic level and why he is number one on the list. The first reason is that he is even funnier in real life – he characters, his stage persona, his jokes, they are all lifted to raise the bar and make even the people who are not fans of him laugh out loud. The one thing that I loved about lee was his passion, he really loves being on stage and his audience and it really does well and truly show. This is what made it such a great all round show, he doesn’t just entertain he really does live in the moment and loved what he did.