Over the years I have started to find that one of my strongest interests in the genre of stand up comedy is Improv. The timing, the cleverness and the humour that can be created on the spot is amazing and there are many acts that i owe a big thank you for getting me interested in it.

No, i will NOT be doing Improv the michael scott way

So interested in fact that I am going to start a three week weekend course on how to actually DO improv! I thought it would be fun to learn to also understand the work and effort that goes into it. So each week I will talk about my experiences with the Improv and also talk about a few of my favourite Improv comedy acts, starting with one of my ultimate favourites The Noise Next Door. 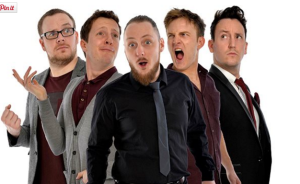 The Noise Next Door

The Noise Next Door was one of the first Improv groups I saw live and made me laugh so much that made my interest in Improv take a whole new turn. Their mix of music and crazy scenarios made their show very enjoyable and extremely hilarious. i was fascinated that no matter how crazy the audience suggestions were they always came back with a very funny outcome. A few years ago when I was freelance I edited this video for ComComedy and that is how I first heard of them, it will tell you a bit about them and how they formed etc.

What I like the most about this improv group is that even though there are five of them, they all have their own personality and you feel that if one of them was missing the group would have a massive hole in it. Its not just their live show that i admire about them, its also the fact they use something so simple as a colour tie to define each of their characters and by creating Youtube video shorts that are hilarious as well as entertaining to the audience.

One thing that the group did do was use online to immerse the audience into their improv in everyday lives as well. A few years ago, they set up the ‘Improv Adventures’ where they got fans to tweet into them what they should do and they did a lot of the suggestions they were given. I felt this was also a very interesting concept to the comedy genre as it really brought the online factor of them into notice.