This week why see one improv act when you can see three! In Nottingham this week, the Playhouse is hosting Miss Imps event Triple Decker featureing Denise’s 50th, Five Chubby Foxes and The Improclaimers. To celebrate the event being show of the week we have not one, not two but three interviews going out across the day so you get to know more about the acts that are perfoming. starting with Five Chubby Foxes. 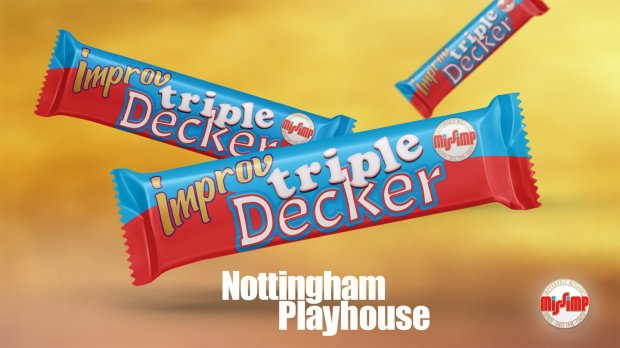 Hello, tell us all about who you all are and three unknown facts about your troupe!

We are Five Chubby Foxes: Brendan, Cat, Dave and Duncan.

Brendan: As part of the celebration of twenty years of MissImp in Nottingham they asked if new teams wanted to form and perform, we answered the call.

Dave: We agreed to do a one-off ten-minute gig, the audience loved it, and we keep getting asked to do more!

How did you come up with the name of your troupe? Was it difficult?

Dave: We were going to be called “The Brendan Duffy Experience”, but one of the members vetoed it…

Cat: Duncan had a list of “things that sound like band names” on his phone. “Five Chubby Foxes” made no sense so we went with that.

Duncan: If someone says something phonetically pleasing in conversation it goes on the list. Also, the fact there’s only 4 of us is a constant source of amusement.

Dave: Quite organically – we try to make a really fun show for the audience, and have a few format bits to help this. Personally, I think the crowd enjoying it is far more important than anything about format…

Brendan: We play to each other’s strengths and this seems to work.

How did you get into improv?

Duncan: I went to a zombie life drawing workshop and there was a woman chanting “Bring out your dead!” before it started. Naturally we got chatting, she said she did improv, invited me to a show and it sort of snowballed from there.

Brendan: I was living in Perth and needed to itch a scratch, that led me to an improv workshop.

Dave: I dipped my toe into MissImp’s monthly Gorilla Burger show, enjoyed it, and started going to their weekly jams. After 6 months of being terrified doing improv, a Level 1 intensive course was a gamechanger…

Duncan: So the audience suggests a physical object, we break it down into concepts and perspectives and then play around with them. It can get pretty wild and meta.

Dave: Last time we were on the Playhouse stage we had bored Greek gods and a duo that were champions at being naked…

Cat: I love the venue, I’m looking forward to performing as a team, and to be a part of a trio of acts representing MissImp.

Dave: It’s cool to be playing such a well-known venue, there should be a large and warm crowd, and there’s plenty of space on stage!

Brendan: The space is fantastic, I get to be silly with the others and this venue gets a great crowd in.

Duncan: Everyone at the Playhouse is super helpful and friendly, there’s tea and coffee backstage and we’ll be performing with Denise’s 50th and the Improclaimers, who are amazing.

It is the month of february! What is the best things about performing on stage? What do you love about it and why?

Duncan: I can have dumb ideas and people will still bounce off them

Dave: Knowing a room full of people have enjoyed their evenings, and that I / we have played a part in that.

Cat: The feeling when everyone’s having fun messing about but it’s coming together, and the audience are enjoying it.

Brendan: I’d love it to be seen as a true artform.

Cat: More non-improv people coming to see. I find that those with no experience of it can be very sceptical, and I’d like to see that change.

Dave: Growth in audiences and more mainstream awareness would be great. And I don’t see why various improv shows couldn’t be televised…Duncan: I’d like more people to adopt the improv attitude, there’s too much cynicism and antagonism in the world.

Dave: Lots of stretching, and exercises to sharpen up and get the mischievous side of the brain working.

Cat: The “three things” exercise usually does the trick!

Cat: For our last show, I think the suggestion was “rucksack”, which somehow lead us to Greek gods. Our guest improviser was actually from Greece so she was in her element!

Dave: For the game Dear Diary I was once given Tutankhamun. It took only two words for the audience to be falling around laughing…

Cat: Because Why Not

If you could have any three people (dead or alive) over for dinner – who would they be?

Cat: “If you’re in your head you’re not on stage with me” – I find that this works for improv and otherwise.

Do you have any pets?

Dave: I have a chocolate rabbit named Sampras.

If you could be from any other decade (or era), which would it be??

Dave: Being around for the moon landing would have been quite something.

If you had to have a tattoo to represent improv what would you have and why?

Duncan: I’ve considered getting a Delta Δ before. In Physics it represents uncertainty or change, and I love the irony of having that permanently.

Duncan: I’ve been listening to the album Colors by Beck on loop

Dave: A couple of Austrian ladies recently told me about Schlager music, which sounds amusing – I’ll explore that a little soon….

Who would play you in the movie of your life?

If you had one superpower, what would it be?