This week is the Leicester Comedy Festival and our show of the week is one of the acts that is performing at the event! Last year Between Us had a crazy year with selling out shows left right and centre at festivals such as Brighton and Edinburgh and this year is set to be even busy! I caught up with The Phoenix Remix Act of the Year 2019 to find out what 2020 has in store for them!

Between Us: Sex, Lies and Improvisation 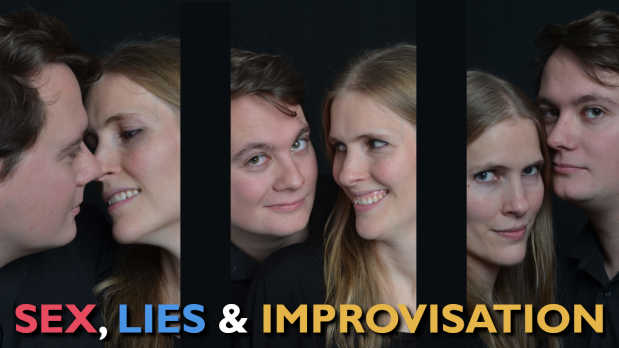 Hello Between Us! It is nice to catch up with you after the whirlwind that is 2019!

Whirlwind is right! We performed 26 shows at eight different venues and taught about 15 workshops. A vintage year!

How have you been since we last spoke?

Really good, thanks! Still basking in the glory of being Phoenix Remix Act Of The Year!

Let’s delve right in and first talk about your brand new show format!

Sex, Lies & Improvisation is the story of a girl, a guy, and a great big lie. It’s all about why we lie to the people we love.

We loved playing with dramatic irony in Between Us shows. The character soliloquies really lent themselves to creating a situation where the audience knew something one of the characters didn’t. So we decided to play with that some more, and Sex, Lies & Improvisation was born!

What makes it different from your last show?

With Between Us, we were open to following whatever genre or tone we found ourselves in. The new show takes what we most enjoyed and what audiences liked best and puts it front and centre. We realised that our favourite art makes you cry with laughter, and then kicks you in the stomach with something real. So that’s what we’re making with Sex, Lies & Improvisation: a dark, sexy comedy.

Leicester Comedy Festival, baby! It’s such a good festival. Great comedy in great venues, without the madness of Edinburgh. We were nominated for Best Improv Show in 2017, and we want to go one better this time!

It is the month of February! What is the best things about performing on stage? What do you love about it and why?

We are super psyched for February this year because we have five gigs – in Sheffield, Wigan, Birmingham and Leicester. We just love sharing our show with new audiences and discovering what we can create together.

Rachel: I’d like to see all the shows that we improvisers know to be awesome getting what they deserve – full audiences, theatre residencies, West End runs and slots on TV and radio.

Alex: I’d like to see improv take advantage of growing digital platforms, especially podcasting and livestreaming. Improv and Twitch seem like a match made in heaven – someone’s going to make that work and do very well.

It totally depends on our frame of mind that day. It doesn’t matter what you do, so long as you connect and engage with each other while doing it.

We’ve just performed in Cambridge at Stealing The Show Presents, and we were given an Alex who’d got sacked and pretended to his girlfriend that he was going to work every day. It was great because at first it was really funny – getting up, ironing a shirt, making a packed lunch just to sit in the pub all day. But it wasn’t so funny for Rachel when she found out!

If people want to find out more about you, where can they follow you on social media?

If you could have any three people (dead or alive) over for dinner – who would they be?

Rachel: Aw, man, we played this game in the car all the way from Sheffield to Edinburgh this August and I can’t remember what I said. John Cleese, Judy Blume and Keanu Reeves, I think!

Rachel: Experiment with the backburner bit of your brain.

Alex: Just leave every life you touch a little bit nicer than when you arrived.

Do you have any pets?

Rachel: My husband is really allergic but my daughter longs for a pet so I’m considering getting a snake. Think I can pull off being Cool Snake Lady?

Alex: I’m totally allergic to a bunch of animals as well (Rachel has a type!)

If you could be from any other decade (or era), which would it be?

Rachel: I’m an improviser so I’m only interested in the present moment!

Alex: Assuming we survive that long, I’d take a chance on the distant future.

If you had to have a tattoo to represent improv what would you have and why?

Alex: A strawberry, cos I love them and they represent the present moment in Buddhism.

The new Sex, Lies & Improvisation playlist is full of retro grungy awesomeness – Violent Femmes, The White Stripes, James. It really gets you in the mood to play!

Who would play you in the movie of your life?

Rachel: Wait, there’s a part going? Audition me! Pick me!

Alex: I’ve often been told I look like Mike Bailey (Sid from Skins), but I don’t think he’s acting much nowadays. Can I say Daniel Radcliffe, just so we get to hang out?

If you had one superpower, what would it be?

Rachel: I mean this is easy, isn’t it? Flying!