We are delighted to announce this morning that in January, The Phoenix Remix are hosting it’s first ever Live show! The show will see some of your favourite articles come to life on stage as well as some of them being something that you can be a part of. Also, we have some fantastic improv and comedy acts joining us as well. 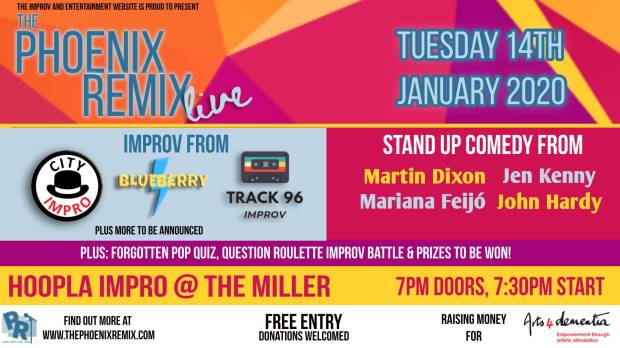 More to be announced soon

Martin Dixon – A freelance TV producer by day, Martin has been a stand up comedian for 6 years. Martin has taken shows to the Edinburgh Fringe and the Brighton Fringe. He’s also written a book, ‘Monster Gay’.

“Audience in stitches” The Sun. “Dixon has a remarkable gift” Broadway Baby. “Hauntingly Beautiful” No One

Jen Kenny – A comedian from Northampton that has now upgraded to telling her great stories about her life to strangers in the pub from a stage!

John Hardy – A larger than life comedian, that is happy go lucky, physical on stage and comfortable with audience interaction. He delivers comedy in a short story format, based loosely on real life events. Don’t worry about jokes and punchlines though, he has plenty of those too

Mariana Feijó – She is a member of C3? and 20% Less but she is also a stand up comedian as well – come and watch as she entertains the audience with her fun anecdotes.

The Forgotten Pop! Quiz – how much music do you remember from the noughties and late nineties? Come and test your knowledge and you may even win a prize!

Question Roulette – the Live Battle – It has been one of the websites most popular features for three years and let’s celebrate it ending by seeing a real life battle by a number of different comics take place on stage trying to create fast paced scenes from the scenarios!

Plus prizes to be won!

We wanted to celebrate our first ever life show by giving back to the community and what better way to do it then by raising money for a great cause such as Arts4Dementia.

Arts 4 Dementia is a UK charity, working with arts venues to empower and inspire people with early-stage dementia and carers through artistic stimulation. Help preserve fulfilling active life together, for longer at home.

Over the next few months we are going to be interviewing the acts, the charity and keeping you up to date with everything going on! Hope to see you there!

Are you doing #Brightonfringe this year and want promotion in the form of an interview? Get in touch! #improv #comedy #Brighton
❤️💞Everyday this month we are looking at a different song and why we love it! Well, it is valentines day month. ❤️💞 . . 🎶 Day 21 - There Is - Box Car Racer 🎶 . . Find out why this song made the list by clicking Link in bio 💌💋 . . . #music #love #February #band #valentines #valentines_day #tomdelonge #boxcarracer #bcr #ava #avamovement #blink182 #song #bands #musician #thereis #gif #bands #travisbarker
This month we celebrate the music videos of Alkaline Trio . . .. The Magic Of The #Music Video! - Alkaline Trio Month - Help Me ... . Link in bio . . #alkalinetrio #mattskiba #danadriano #band #music #musicvideo #musicians #bands #videoediting #helpme #editing #videoedits #inspiration #steampunk
⭐️ The Phoenix Remix Live! ⭐️ Tuesday 10th #March raising money for the Douglas Bader Foundation Meet THE CARETAKERS @caretakerscomedy Find out more information about the other acts that are performing here: https://www.facebook.com/events/168934561090242/ . . . #improv #london #comedy #phoenixremixlive #charity #fundraiser #live #londonbynight