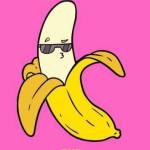 It’s Edinburgh fringe season and over the next month we are going to be bringing you reviews of some of the previews we have had the privilege of being able to see. The first on my list was Banana Hut Gang Improv Preview show at Bridewell Theatre in Bride Lane near to Blackfriars and St Paul’s.

The theatre is an intimate yet perfect size to do a fringe preview in as it reflects the number size that a show may get in Edinburgh. The fact that it is a Monday and the week before Bank Holiday the number audience size is impressive.

Before the group arrive on stage the audience is filling up and welcomed with a review card on their seats to write feedback at the end of the show. I am seeing this preview at the end of May and the group are not heading up to Edinburgh until mid August so having feedback forms for a newly established group as well as show is a very clever tactic to get the kinks out before the main event.

The show that Banana Hut Gang Improv are taking up to Fringe this year is called Choose Your Own… Improv which is based on the ideology of those books that you used to read as a kid dating from the seventies to the late nineties.

When the show begins you are welcomed to only one improviser on the stage that welcomes you to the attic of the house that he is moving away from and goes through old boxes until he finds the Choose Your Own Adventure box. The one thing that was great about this opening was the object work – the improviser was so committed to making the attic come alive – everything from dusting the old boxes and then explaining everything that was in them, all with a nineties reference such as pogs and tamagotchis. This was a great way to define the era in which the books were around and brings the audience in.

The first set of audience participation is right from the get go as they choose the genre of the book, the name of the story and the name of the hero etc. Once all these are established we are then welcomed to inside the book and the other 5 improvisers. We are welcomed into a long form improv narrative that is based around Mcbeardyface the cowboy in Dawsons Creek. The audience are involved throughout the narrative as they choose what route the story goes with two different options.

The one thing I want to point out about this show is that the audience laughter was constant, as the show went on the laughter heightened to react to the silliness that was happening on stage.

One thing this team need to be praised for is their character work – some of the improvisers ended up having to play more then one character and each and every one of those were completely different so it was easy for the audience to differentiate between who was in play. Praise also needs to be given to the character commitment when they were just a improviser on the stage that was only in the background – I have never seen such a stubborn horse that committed to being stubborn the whole way through – genius.

If you are a fan of the Choose Your Own Adventure books then you will not be disappointed as the players allow the audience to make the wrong choice and play it out. If it leads to a bad result they will then ‘replay’ the past section and lead it by saying here is what the other route would of led to. A simple yet very clever technique to tie into the books.

When it comes to long form improv I am very hard to please because I am an editor I feel some groups do not know when to cut and it can drag on. Not with this group – the edits were slick, the narrative flowed so well it did not feel like it was improv, it was seamless and for a group that are taking their first show to the Fringe that is a really impressive trait to have.

If you are a fan of long form narrative improv then you need to see this show. Even if you are not so much, you still need to make an effort to see this show because it really is impressive and the high energy of the team will not leave you disappointed.