3 Jul 20182 Jul 2018
It is festival season and that means that in the next month there is so many great comedy festivals to look forward to! This month we are talking to acts performing at an array of festivals to find out more about their sets and what they have planned for their shows. Today we look at an improv troupe that is a London based troupe that is taking an improv show that is magic to the festival and is going to excite a lot of Muggles. I caught up with Stephen to find out all about Improvables show. 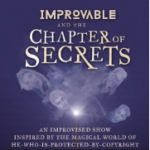 Name Of Show:Improvable and the Chapter of Secrets

Hello Stephen! Tell us about Improvable!
We play our own mix of original games with joy and reckless abandon. It’s a bit like, “Whose line is it anyway?”, but higher energy and sillier. We are offbeat and friendly, and will leave audiences of all ages full of warm and fuzzy feelings towards their fellow human beings.

How did you come up with the name of your show that you’re taking to the Fringe?Our show is inspired by the world of Harry Potter, so the title is a play on one of the book titles.

Tell us a little bit about your style of improv?
We’re a fast and playful group, with lots of warm fuzzies. We try to keep everything light and friendly.

What will your set be about?
Our set is a narrative adventure story set in the wizarding world. Expect magic spells, fantastic beasts, prophesies, and a cheeky short-form game or two for good measure.

What other acts are you looking forward to seeing at the Fringe?
We’re really excited to go and see shows from outside of London- it’s great that the festival is so international! We’ll be seeking out the strange and unusual, and shows we wouldn’t be able to see anywhere else.

Have you done the Fringe before?
This is our first time!

What have been some of your favourite shows to date and why?
We’re currently previewing Chapter of Secrets in London, and have enjoyed every single one. We really like playing in this world, and will hopefully be doing this show for a long time!

Some acts have already tried it and done shows in the environment, but do you think virtual reality has a space to be used in improv and what other modern technologies do you think could alter the way we interact and watch improv?
I really think there’s no substitute for watching humans improvise live in front of you, though there are some fun ideas being floated about VR and robot improv.

What have been some of the most unique and different improv sets you have seen this year and why?
Jill Bernard from Huge theatre visited earlier this year and did her solo musical show. It was very charming, and I loved the way she balanced her commitment to the story with interaction with the audience.

The best thing about performing at the Fringe?

Doing lots of shows in a short amount of time

The most challenging thing about performing at the fringe?

What three items are essential for a successful Fringe?

What’s the secret to successful flyering?

I’d love to know the answer to this too!

What are the best venue’s at the Fringe?

I think it’s really about finding the one that suits your particular show best, there are lots of great ones.

Want to see Improvable before they head off to the Fringe? You can! London Previews are taking place on July 24, and July 27, at the Nursery Theatre.