Show of the Week – INTERVIEW – Notflix, The Vault Festival, London

This weeks show is with a musical improv act that you must go and see if you are planning on visiting The Vault Festival in London this month. They are a female musical improv troupe that are making audiences laugh all across the country with a show that has a parody elements of Netflix to it. Today I speak to Aisling of Notflix to find out more about their shows from the 7th-11th of March.

Hello Aisling! Tell us about Notflix Improv – who you all are and a little bit about yourselves?

Well originally we were called Waiting for the Call but now we are better known as the name of our show, Notflix. Notflix is a totally improvised comedy musical based on an audience suggestion of a favourite movie, then using the location, key scenes and characters as a jumping off point, we create a brand new narrative. All scenes, songs and vocals are improvised spontaneously by the all female cast and a live band.

It’s improv, so every show is different; but what remains the same is a joy-filled, high camp, musical celebration of everything you wish a movie could be.  As for the team there are usually 6 of us playing led by our director, the beating heart of Notflix, Sarah Spencer.  We’re a bunch of passionate performers who are super serious about being silly! We’ve all got different voices, styles and something different to offer whether that be ballet dancing, amazing harmonies, an Irish jig, a big belt, different languages or the worm!

When not improvising the English/Irish/ Norwegian cast members perform in lots of other capacities in London and beyond.  From Shakespeare to immersive theatre. From stand up and self penned one woman shows to film and TV. You can even catch one us drumming at music festivals throughout the UK.  Core team members are Pernilla Holland, Holly Mallet, Aisling Groves-McKeown, Ailis Duff, Jodie Irvine and Clare Buckingham.

How did you come up with the name of you troupe?

It actually just appeared out of nowhere, one of those real light bulb moments! However, Sarah did relentlessly google it just to make sure it wasn’t already taken.  It did seem a bit too good to be true.  Also someone who worked for Netflix saw our show during the summer liked it and assured us we wouldn’t be sued… so that’s good!

Tell us a little bit about the show you are performing at The Vault Festival?

This is our second year at the Vaults and we’ll be performing at 9.15pm every night from the 7th to 11th March, with a matinee at 4.45pm on the 10th thrown in for good measure!  We’re delighted to be back at this brilliant festival after our award winning sell out run last year. We’ll be taking some of your favourite films and giving them an injection of female fuelled, musical, uncynical joy!  As always, the show will be different everynight, but this time the cast will be too!  As well as our core cast members, you will be seeing some fresh faced new cast members pop up too!

Does Netflix play a strong part in your shows?

Netflix plays a big role in so much as people often suggest films they have just watched on Netflix.  Also, like Netflix itself, Notflix tries to keep things fresh and topical albeit in often the silliest of ways. Like Netflix, we also want to create really interesting, dynamic characters that the audience cares about.

Why do you think it’s good to be an all female improv troupe?

It’s really freeing.  When you step on the stage, you can be any character, any gender, everything is up for grabs.  Even though this is possible in mixed groups, you often find people assuming you are a female character just because you are a female in real life.  It’s also a really supportive environment and empowering position to be in – we are a group of women and we are getting to tell stories the way we want to tell them. (For example Top Gun with a Notflix twist was a lot of fun!)

What sort of style Of improv does Notflix do? Do you always do the same format?

We always do a long form musical which is inspired by the film suggestion of one audience member.  We pick written suggestions out of a bucket – so quieter audience members are in with a chance too!  When it comes to form we do a Notflix version of a musicalised Harold. Although there are usually just of couple of main characters in each scene, the backline plays a huge part in creating the world of the movie and is something we have a lot of fun with. We’re all about big, bold characters and relationships.  Even in the craziest of settings we always want the audience to care about the characters and believe in the relationships.  As much as we love to make you laugh we also love those “Aww” moments too.

You are a musical based troupe – what have been some of your favourite songs to sing?

All the songs we sing are original and improvised in the moment with our incredibly talented musicians. It’s brilliant when a song completely reflects the character that sings it and the genre of the film we are doing. We love to be able to have fun and play games within songs too.  If the moment allows, we like to do a cheeky nod to some of our favourite musicals without  directly copying.  And like any musical troupe we love a good metaphor and unexpected rhyme.

Our first port of call is  twitter @WFTCimprov and if you come to one of our shows we’d love to hear what you think #Notflix  You can also check out twitter for all upcoming tour dates and any workshops we might be doing.  Our website is notflixthemusical.com and we are represented by the amazing CatFaceTalent who are also on twitter @CatFaceTalent  We also have an instagram account @wftcimprov

What shows are you looking forward to most to perform at this year?

We are so excited about the dates we’ve got lined up in London and beyond this year! We’ll be returning to some of our favourite venues

The Komedia, Brighton (10th, 20th May) , Gilded Balloon (Edinburgh Fringe, all August) as well as making new regular homes (London Top Secret Comedy Club on the first Tuesday of every month).  Personally, I’m really excited about the Heverfestival on the 26th May and London Underbelly Festival on the 7th May – who doesn’t love flower covered castles and giant purple cows?!  All our tour dates can be found on our website notflixthemusical.com

What other musical troupes do you like and why?

Showstoppers have been so supportive and are real trailblazers when it comes to bringing musical improv to the masses in the UK.  In particular their musical director, Duncan Walsh Atkin’s support and mentorship has been integral to our development.  The US troupe Baby Wants Candy, we love the fun they have on stage and the amount of humour and playfulness they bring to songs.  As soon as you enter the auditorium you know the party has started!

What do you think 2018 holds for the world of improv – what would you like to see happen in the next 12 months?

I see improv continuing to widen it’s appeal in the UK and getting bigger audiences. It’s  been brilliant to see Austentatious play the Westend this year. It would be great to see more improv on the TV. I also see more diverse improv troupes popping up, giving voices to people that feel the need to play and to be heard.

And Finally – in three words, why should people come and see you at the The Vault Festival? 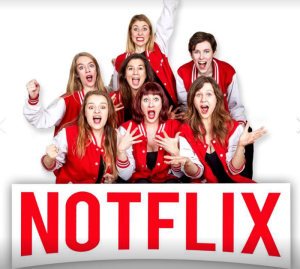 My Crazy Ex Girlfriend (it’s kind of our spirit animal), The Good Place, Orange is the New Black,

Well some of us recently saw this obscure musical…. Hamilton, don’t know if you’ve heard of it………

Favourite style / genre of song to sing in a show?

Upbeat, fun, irreverent. Love it when the music really captures the spirit of the film.

The last thing you liked on social media?

what would your autobiography be called?

Well if it’s Notflix’s it has to be    “Notflix …..Because Everything Is Better As A Musical”

Who would be your dream improviser to sing a duet with?

Kate McKinnon – we’d have so much fun with being different characters!

An improv group you would love to collaborate with?

The Glenda J Collective – Josie, Ruth, Pippa and Cariad are absolute powerhouses when it comes to improvisation and they all bring something really different to the mix.  The American duo, TJ and Dave – they leap so fully into their characters and do it with so much heart that time seems to stand still when they improvise.