For this weeks show of the week, we venture across to the West side of the country to interview an Improv troupe that are performing on the 23rd February at the Improv Theatre Bristol. I caught up with the troupe that focus on Improvised D&D Tales of Adventure to find out more.

Hello guys! Tell us about The Tales Of Adventure Who you all are and a little bit about yourselves?

Alice – I’m Alice, I’m more of a comedian then an improviser but I love improv. I play Bagsi Badly a half orc paladin. She’s a lover and a fighter. She is pretty violent but only to tyrrents, villains and ne’er-do-wells. She falls in love about once a series and it usually end badly. I have an adopted/abducted son, a goblin called Not Jerk, who doesn’t really like me but that’s kids for you.

Cat – I’m Cat, and I play Trym Tosscobble, a Halfling Rogue, who likes to steals things and ocassionally flies into furious, teeny-tiny Barbarian Rages! I love playing improv and comedy roles, and although Trym can be a serious little critter, she is so much fun to play. Me, I teach yoga and drama workshops, and love dinosaurs.

Tom – Hellooo, I’m Tom, I’ve been involved with various theatre/improv companies for a while – but Tales of Adventure is the first time I’ve been able to combine this with with my love for games! I play the Reverend Hatchett, who has had some hard hitting life experiences including literally being turned into a geranium. I really enjoy mixing the storytelling from improv with the structure of D&D to make a pretty special show!

Ste – Hey! Ste here – I’ve been improvising for a couple of years now. Totally fell in love with improv after my first workshop and now I get to do things like this! I play Geoffrey Banjo in the show, he’s a half-elf bard, and he plays a mean banjo. It’s unclear whether his name came first, or if it came after he started playing. He also has a slide whistle.

Steve – I’m Steve. I’ve been improvising for almost a decade with various performing groups (most notably Degrees of Error), and I’ve been playing Dungeons and Dragons (and various other rpgs) since I was about 12 – my dad is an old-school gaming nerd and got me started on the hobby while I was young. In the show I’m the GM, so I play all the other characters and describe what’s going on.

How did you come up with the name of you troupe?

Ste – Well, the show was originally called ‘Quest, And…’, but we thought that play on words would be a bit too niche, and we wanted something that gave you an idea of what the show was… so after a lot of brainstorming between Steve and I (it went on for days) Steve suggested ‘Tales of Adventure’ – which was exactly what we were looking for!

Tell us a little bit about the show you are performing on the 23rd February?

Alice – After crashing from space into a new world set in a western, we battled some bad dudes who turned people into living skeletons and now we’re heading to other towns to fight more. Something pretty weird is going on and I’m a little drunk.

Cat – Well, we’ve just been ambushed by a bunch of Devils. All except the Bearded Devil, which I’m hoping to run into in this episode. Our quest is to find out what and how the heck these evil dudes have been killing everybody in a 100 mile radius, leaving undead ghost towns in their wake.

Tom – The nice thing is that you don’t need any knowledge of D&D, or of the story so far. The story and setting is such that you can pick it up straight away; it’s about a bunch of heroes taking down the bad guys. Which may or may not be on a pirate ship… or in space… or in a western… or…….

Ste – It’s improvised… so who knows! You can guarantee a lot of silliness, plenty of laughs and audience participation though. Plus I’m pretty sure Geoffrey will want to get another hat. He loves a good hat.

Steve – I’ll have to keep most of the details secret (because I have no idea what these guys will get up to), but I have a feeling there’s going to be a hellishly dramatic finale!

What have been the highlights of the shows that you have performed previously? 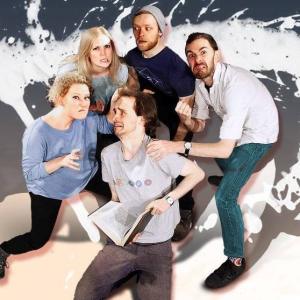 Alice – I got married and then about 5 minutes later my bride was vaporized. I tried to use my Lay on Hands (a paladin healing ability) to relieve her but she remained a pile of dust, just with a slightly healthier glow before blowing away in the wind.

Cat – One of my favourite moments was in the last series, when we were aboard a pirate star-ship. The audience became the ship’s crew, some even had characters, and there was a moment the whole room erupted into cheers and woops, and it felt as if we were totally transported in time and space. Loved it.

Tom – we’ve had a few improvisers from other companies play guest characters and these have always been great episodes. Whether it’s chats with an animated suit of armour, or battles with a semi omnipotent tentacle monster you never quite know who will turn up.

Steve – The moment when Tom’s character was transformed into a potted plant my a random magical mishap at a crucial moment (I love rolling on random effect tables). Tom’s incredibly facial acting for ‘leafy dismay’ will stay with me forever I think!

You are based in Bristol what’s the improv scene like?

Steve – Shameless self-promotion warning: I’m one of the directors of the Bristol Improv Theatre, which is the UK’s first full-time theatre devoted to improvised work. We aim to be the centre of what is growing into a vibrant and active scene in Bristol. There are all sorts of improv groups, courses and shows in the city – some of the community have started to say that they’re too busy improvising or watching shows to do anything else in the evening!

Tom – Amazeballs. It’s a really good time for improv at the moment, the Bristol Improv Theatre is becoming more and more of a hub with a whole mix of shows and classes whatever your interest or ability, but with so many places like the Wardrobe Theatre and the Alma Tavern across Bristol there’s just lots going on.

If people want to get into improv there where can they go to train?

Steve – The Bristol Improv Theatre runs a range of courses for anyone looking to do improv. From beginners courses at Hamilton House and free drop-ins every month, to advanced scenework courses or improvised musicals! We also often host the Bristol Longform Improv group, who run their own drop-ins focusing on american style improv and regularly have amazing guest teachers from across the country (or internationally). There’s something for everyone!

Alice – You can find me on twitter at @AliceTaylorM, I hope you like cat photos and jokes about sandwiches.

Cat – I’m on Twitter as @flyoufools, if you fancy idle ramblings about food and feminism.

Tom – I’m @twm_bridges and try to share backstage photos from the magical world of improv. So a lot of arsing around and poorly lit shots.

Steve – I’m not on most social media because I like to preserve an air of mystery about myself.

What do you think 2018 holds for the world of improv – what would you like to see happen in the next 12 months?

Steve – More people finding out that it exists! Improv is still a growing artform in this country, and it would be amazing to see it get wider recognition outside of its own community. Improv is such an amazing thing we want everyone to know about it.

The BIT are holding Women’s Only Workshops, which is really exciting for the Bristol scene. Hopefully this will encourage more women not only to attend workshops and reap the benefits of improv on a social and creative level, but also allow women increase their confidence to get up at jam nights, form troupes and take the limelight alongside men.

And Finally – in three words, why should people come and see you at the Bristol Improv Theatre?

All – “Fantasy lovers collective.” or “Slapstick with Swords”

The last thing you liked on social media?

Alice – A joke on Twitter by the very @MartinPilgrim1

Steve – I honestly can’t remember, I don’t like things very much.

What would your autobiography be called?

Cat – Who Wants to be a Millenial

Ste – I apologise in advance.

What is your favourite joke?

Cat – Frasier Crane is at a ski resort for a psychologists’ conference. He says that he has never seen so many Freudians slip. I still giggle to this day.

Tom – Anything from the Walk On The Wild Side series. For some reason talking animals make me laugh till I cry and wee a bit.

Ste – Not a joke so much as a great impression of a Shetland Pony – ask me to do it if you ever bump into me.

Steve – What’s the difference between a dirty coach station and a lobster with a boob job? One’s a crusty bus station and the other’s a busty crustacean.

Improv group you would love to collaborate with?

Alice – I couldn’t imagine a better group of people the the rest of the Tales of Adventure gang… but if that doesn’t count comedy store players.

Cat – Wow, tough. I’d love to work with Closer Each Day one day, as their show is awesome. And of course if I ever had the chance to work with Colin Mochrie that’d be a dream come true.

Tom – Racing Minds are one of my favourites at the moment, very clever, very, very silly and really nice chaps to boot.