Interview – The Best Podcast you are not listening to…yet

Are you looking for a new podcast to listen to or want to listen to one that is all about everything from television shows to comic books? Well Nerdfest UK is there to fill every need, based in Newcastle and formed of a group of Improvisers – this hour long podcast released regularly is there to fill all your Nerdy Needs. I sat down with the group to find out more about the new kid on the block.

Hello Nerdfest UK podcast! tell us a little bit about the team behind this venture?

Hello! Our team consists of Jon, Hazel, Daniel, Ian, another Ian who must never be in the same room as the first Ian, and Peter. Most of us come from an improvisation background, apart from Peter who we will get on stage one day.

How did the podcast come about?

Most of us have known each other for a while, through improv workshops and various other things. We all decided to go watch Mad Max : Fury Road, and set up a Facebook chat group to arrange the details. After the film we kept chatting in the group, sharing films and TV we had watched and enjoyed. Eventually, after several pints one night, we decided we had such fun talking about his stuff that other people might like to listen to it!

Tell us about the podcast!

It’s a twice monthly podcast talking about all things ‘nerdy’, mainly in film and TV but branching off into other areas as well. We don’t have a set format for each show but there are a few recurring features. Most episodes include a “shameful gap” feature in which one of our nerds watches a classic film which they have somehow never seen and discusses it with us – examples so far include Robocop, Die Hard 2 and They Live. We also have “Film Buff or Film Bluff” where the nerds have to guess whether facts presented to them are real or nonsense! We always tend to talk in depth about a recent film or TV show, and often go off on some very strange tangents. 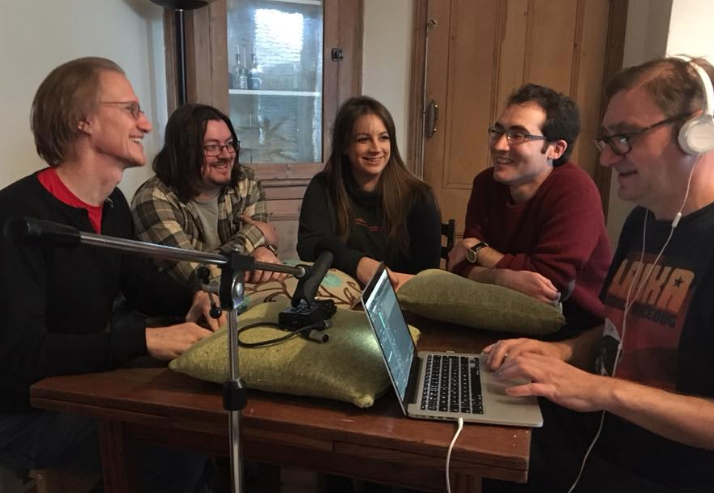 What is the thing that you are all the most ‘nerdiest’ about and why?

All of us love film and TV, but a few of us are particularly obsessed with certain shows – whether that’s an Ian with Doctor Who, or Hazel with the West Wing. Daniel knows more about Star Wars than the people that make Star Wars, another Ian is a Marvel/DC comic book fan and Jon and Peter are both massive music nerds.

What is the most fun thing about recording a podcast?

The most fun thing is that’s an excuse for a group of friends to get round a table together and chat about the stuff they love (and occasionally hate). We really enjoy each other’s company and think that comes across in the podcast.

What is the most challenging thing about recording one?

Keeping to the point and keeping to a length! We try and keep each episode to around an hour long but sometimes there’s a lot to fit in!

What films / comic books/ games are you all most excited about coming out in 2018 and why?

We are all looking forward to Avengers : Infinity War, and Black Panther before it. There’s also a Deadpool sequel on the way. There is a little trepidation about the new Star Wars spin-off, Solo, but hopefully that will be great too. TV wise there’s too much to choose from but the return of Westworld should be a highlight, and there’s a new Doctor Who too!

What can we expect from Nerdfest UK in the up and coming months?

Continuing nerdiness, bad jokes and discussion about all the great stuff coming out next year. And possibly something live at some point if we can get enough nerds interested!

We have a twitter feed @nerdfestuk and a Facebook page (search Nerd Fest UK) which we keep updated with news and anything else we find interesting. We’d love people to tweet or Facebook us with their thoughts on what we’ve discussed and any suggestions for future topics. We particularly appreciate immediate corrections to any small mistakes we have made!

In Three words why should people listen to Nerdfest UK? 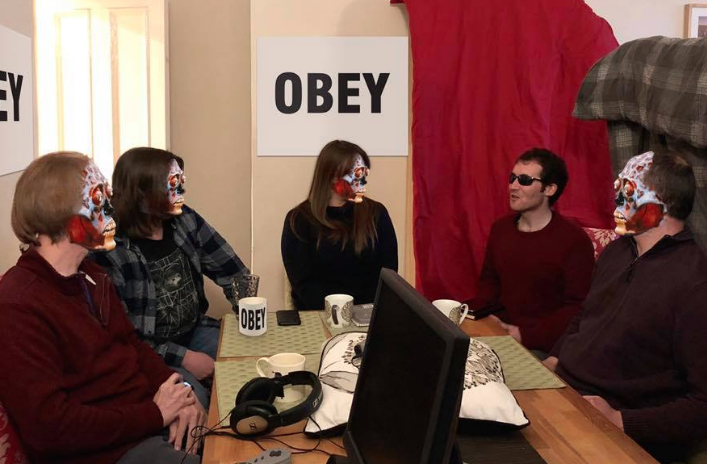 Ian M: UFO: Enemy Unknown (the very original X-Com). Never ever ask me about this unless you want a long, boring conversation.

Hazel: Thor (for his humour, not at all because he’s stacked…)

If you had to marry , kill and kiss a superhero which ones would they be?

If you were a super hero what would your super power be?

Jon : super speed , so I could get more done.

Ian M: multipleism! (see Marvel’s Madrox or DupliKate and MultiPaul in Invincible) – i could do every stupid thing I think of.

Hazel: I love travelling, but hate the actual travelling part. So some sort of apparition ability would be awesome

You have to live in one television / film / computer game world/city for ever – which would it be?

Jon : I think we do already live in The Matrix.

Ian M: The Marvel Universe, anything can happen.

Peter: Hawkins (Stranger Things) but without the impending death

Hazel: Firefly, so I could constantly hum the theme song to whoever passed by – “Take my land, take my sea, you can’t take the sky from me”. Also, it should never have been cancelled so it would be great to carry it on.

Daniel: Pawnee, Indiana. Everyone usually seems to get along and I like that!

The film you are looking forward to the most this year?

Ian M: Troy Baker in the Telltale Batman game. Seriously! No diss on Bale or Keaton but there’s a rounded, vulnerable Bruce Wayne here that the films haven’t managed.

Daniel: Christian Bale but only in the second film of his trilogy!

Hazel: George Clooney. At least he admitted he was shite! But it’s probably Christian Bale

The name of your autobiography

Jon : The true story of how I became a billionaire superhero

Hazel: There and Back Again: A nerd’s Tale

Peter: How to be fabulous at everything