This week we started to pick things up in the world of musical improv. We started by doing a variety of warm ups – one being all about the number 8 -people stand in the middle of the circle and say eight things on a topic.

We then warmed up our voices by doing scales and then it went straight into the rhyming aubergine game that we played a few weeks ago. I can’t remember if I explained it the other week so will quickly catch you up with what it actually is. It’s a rhyming game that goes round a circle with one person saying the first line of a rhyme and the person to your left saying the next line. So the rhyme goes:

Person 1 : the first one I would [add a line here]

Person 2: the second one I would [adds a line that rhymes with the end of the first persons line]

After this we then went onto the fun musical game we played in the first lesson about mighty mice – it’s such a fun little musical game.

Mamas going to buy you a [random object]

“And if that cat doesn’t make

Then the person to the left would have to finish the rhyme with a word at the end rhyming with smile So for example.

“Makes going to take you on a trip to the Nile”

We then took focus on today’s lesson – it was all about bringing the real format of songs to a scene. To get used to improvising real songs, we first did a warm up where 4 of us would go up on stage and one would sing a verse then someone would make up a chorus that was simple and everyone would sing it.

All of the songs in this exercise were all about animals which was good fun because even though the chorus was simple it meant you could still bring the animal to life.

The next thing that we did was raise the bar and start to focus on bringing songs to a scene. We would play a game that The Maydays do where they asks couple in the audience how they met and then do a musical number about that when the scene hits the right moment.

The last thing of the night that we did was stand In a circle and walk across it singing different lines and then it naturally makes a song. It was a really fun night and I love this class as I learn so much, I am actually pretty sad that it’s ends soon. Well, I say soon, I still have 4 weeks left.

This week I got be chance to also rehearse with night version, an improv troupe set up by Stuart Moses of Improv London Podcast. The shows works by improvising to what images and sounds you see and hear.

It was my first time I have been able to go to rehearsal and very much looking forward to being part of the show at the Hoopla marathon near the end of the month. 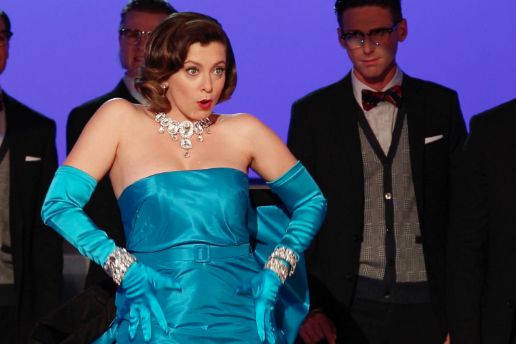 This week was focussed mainly on starting to bring musical numbers to scenes and when I thought of this I instantly thought of the television show Crazy Ex-Girlfriend (and no, of course it wasn’t brought on by my conversation in the break with Helen about our mutual love for it, oh no…). Ok, it was because of the fact that me and Helen had spoken about it, but it is also because I listen to the songs from the show a hell of a lot.

I really like the music from this song, mainly because they are songs that you would least expect from a musical number, they are outside the box that makes them unique and why I find them highly addictive to listen to.

The reason why this appeals to this weeks lesson is because I found at times some of my lyrics were really outside the box – some because i had the idea to do this and other times because I sort of panicked and made them up on the spot.

For example – for the couples song at the end, we got the suggestion of being on an airplane to Frankfurt is how this couple met. My initial thought was to be the person on the flight that was scared of flying and go from there. We also had to make sure that when we sung the musical part that we included the names – they were George and Sally. I went for the name George as I like a challenge as its a hard name to rhyme. Also, another thing that made me feel a little bit of a fool was that I knew Carsten in the audience was German and i sort of felt like an idiot as i realised this when I was trying to talk German and made a bit of an idiot of myself i felt before we got into singing.

I started to stumble over my words, introducing myself as Holly (which i made up for in the lyrics) and both myself and Helen got into a fit of laughter. When we did get into the musical melody it went ok. The first section of the song on the place I sung:

“We are on this plane going to Frankfurt,
I just broke up with a a girl called Holly and my heart Hurt,
When you sat next to me my mind went yes,
Nice to meet you I am George S!” (Couldn’t think of a lot that rhymed with George so introduced a surname)

I listen to Crazy Ex-Soundtrack a lot as I like the lyrics, pay attention to the song structure and also when i watch it the dances that goes with them. I find it inspirational as an Improviser especially doing musical improv because i think sometimes random and thinking of musical numbers in a different way is important.

I like when I do musical improv trying to think of areas of the topic people may not of even thought of – trying to think differently as i have found doing this does sometimes get the biggest laughs. I find television shows like Crazy Ex-Girlfriend really help me to focus on what can be a song and also help me develop in the world of comedy by thinking of bringing something i love to a scene – a little bit of crazy and also random but completely relatable.