must give a visit. The Amalie Arena is the home of the Ice Hockey Team Tampa Bay Lightning as well as being a great location to see some of the biggest musicians in America. When the arena was first built it was known as the Ice Palace and over the years it has been named many things depending on who owned the naming rights. When I went there in 2013 it was named Tampa Bay Times Forum and changed its name to Amalie in 2014 when the rights were transferred to Amalie Oil Company.

So why should i be interested in an arena i hear you ask. Well, the stadium is located right in the centre of the city near the water that runs along the side of Tampa and if you are staying in hotels such as The Marriot Waterside Hotel and the Embassy Suites Downtown Convention Center, then you will be no more then a 5 minute walk away from this arena and may be interested in seeing what is happening whilst you are in town. 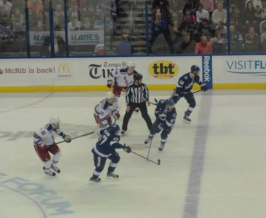 The interior of the arena is pretty impressive and since it is the home of NHL team Tampa Bay Lighting there is a lot of decor and a shop celerating the team. If you go on a game night you will also see the news reporters live outside the stadium reporting on what you can expect from that nights games

Over the years many artists and musicians have also played at the venue too including Bon Jovi, Iron Maiden, New Kids on the Block, Lady Gaga, Britney Spears, The Who and Kanye West. When we went there in 2013 we ended up going to quite a lot of different events such as ice hockey and music performances because the prices were quite reasonable to see something.

energy around the venue but they are both as exciting as each other. On game days for The Bolts there is a strong sense of determination from fans tht the team will win and they flood the stadium in their thousands to support their team. The live organ and the intro music that follows for the team really pumps up the audience and creates a really high adrenaline and no matter where you sit in the stadium you are guranteed a great view of the ice.

The place is a great venue for a music event as well, whilst it holds a capacity of 21,500 it does not feel that big and you can get some fantastic views. The concert that I went to was also great for people at the front, the back and sides because the artists such as Enrique Igleasis and Flo Rida came into the audience so that everyone can see. The arena has a great audio levels so wherever you sit you are sure to have a great time and to enjoy whatever concert, game or show you go and see. 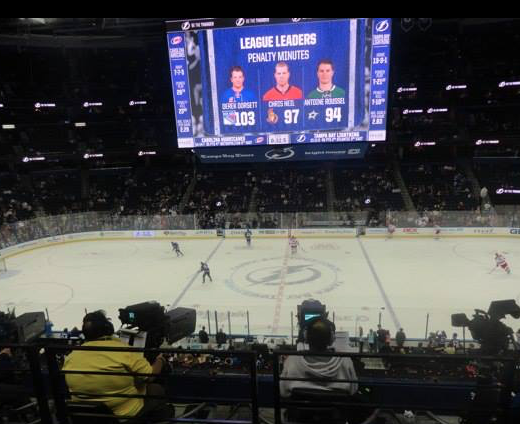