The one thing that everyone loves about Disney films is that they all have hidden Easter eggs within each film and also can have hidden conspiracy theories. Now, in the past decade most Disney films have been linked together through the hidden gems in the background, however one of their most recent films has got so many connections that make the Disney universe burst wide open.

In the recent few years, it has been revealed that all of the films by Disney’s sister company, Pixar, all link to each other as they happen in the same universe at different times (for more information on this click here to go to the website that is focussed on explaining the long and fascinating links between the films but make sure you have seen all the Pixar films otherwise there may be some twists that will be spoilers for you)

Since Frozen has hit our screens, everything has gone crazy; it has become one of Disney’s biggest films, with merchandise constantly selling out as well as the outfits and children all over the world constantly singing Let It Go (and many viral videos of all the songs in every shape and form).

The first thing that was revealed just after the film came out was that Rapunzel and Eugene from Tangled appear in the crowd attending Elsa’s celebration of reigning to become Queen of Arundel. This sparked the first set of theories to the film that the ship that Elsa and Anna’s parents set off in the beginning of the film was going to visit the parents of Rapunzel to celebrate the birth of their new child. However, in the film, the ship hits a massive storm and the boat sinks. The next part of the theory is that the ship that their parents are on is the shipwreck that appears in The Little Mermaid where Ariel finds all her ‘thingy-ma-bobs’ for her collection. 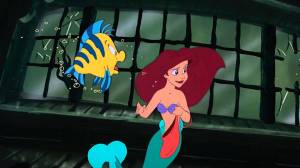 In the last week another part of the theory has been revealed by non-other than the co-Director of Frozen, Chris Buck. According to Chris, Elsa and Anna’s Parents DID NOT die at sea but were actually left shipwrecked. He believes that the parents were shipwrecked and they had a baby at sea which also landed on the island with them where they made a treehouse, lived a lovely little life until the parents were killed by a leopard. If this sounds familiar, you will realise that the story that I am actually describing is Tarzan.

Yes, you heard that correctly, Chris believes that Anna and Elsa are older sisters to non-other than Tarzan. With this theory now being revealed recently, it begs the question – what other films can possibly be related to the Frozen franchise and is the story about them all being related really that believable and pave the way for future Disney films?

Tagged as: disney, frozen, Inside Out, tangled, tarzan, the little mermaid, theory