We are heading the Vault festival in London for something special, Brent Would is bringing his show for three nights and we have a very special gift for you! A discount code to go and see him live! I caught up with Francesca Reid who is the creator of this drag artist to find out all about the show and what Brent has in store for this audiences… 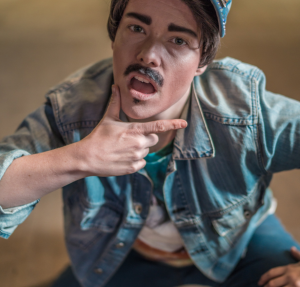 Hello  tell us all about who you all are and three unknown facts about yourself!

I am Francesca & plainly put, i’m an artist. It took a while to call myself that without shrinking in on myself – but it is the best description of who I am. I create multidisciplinary work and do so for audiences, community projects and as part of my activism. I think many folk are artists, including mathematicians, scientists & engineers. It may have a more seemingly practical application, but we are all seeking creative inspiration to solve various questions and evolve concepts. A lot of my work is in comedy as I think laughter is one of the best ways to create change and enhance the lives of the others.

* I originally started life as a dancer aged 3-18 & my debut role was as a mouse called Doris!

* I was in a public information video about anti-social behaviour that was made when I lived in West Sussex & a famous actor had to have his lines written on the lid of a biscuit tin.

*I come from the Harrington’s, one of the largest pie and Mash shop purveyors of yesteryear

How did you get into drag?

My Mum whist not a performer, was always very theatrical and used to tell anyone who’d listen that she loved drag queens. So that positive association always floated around in my psyche. Then when Rupaul’s Drag Race became well known, I was having a tough time personally and one of my friends showed me some clips on YouTube. It was one of the only things that gave me a little respite from the fug. As my politics have grown, I soon saw how far they had to go to address their attitude to diversity and their representation of certain groups.

However, at the same time I was being exposed to more and more pockets of the UK scene. It was through a radio show & then a podcast I used to create with Hollie Would, that I met a wide array of talented pillars of the drag community. Particularly Adam All, who told me about Man Up and then I had to apply.

How long does it take you to do your makeup and get ready for stage?

It really depends. I can do an acceptable job in 30 mins however if I am doing something more thematic or stylised and I really want to take time of making my contour very detailed, it can be 45 mins to an hour.

How did you come up with the name of your character? was it difficult?

I had a drag wife for a spell and her name was Hollie Would and so I could do something that had our family name in it too. My little sister from another Mister, the amazing Beckie Briley is an Essex native and she suddenly said “why not Brent Would?!” thus the Essex boy himself took his first steps into being.

I have been performing since the dawn of time and have done so as part of casts and alone, however Brent seemed to be gathering steam and has regularly trotted out 45 min sets here and there (people didn’t tell him to get off ha ha!) so it seemed like the right time for him to get his act together and share his seed with the masses on purpose.

How did you get into improv?

I almost accidentally joined an acting cult in L.A circa 2011 and when I was beckoned to those sunny shores I decided that I would take weeklies at I.O West. It was always the way my brain had worked, but to find others who got it and to have a framework of understand really afforded me a sense of belonging and clarity. Then when I realised that the acting class was indeed a cult and not a space for learning, I booked myself onto an intensive at Second City and have never looked back. It wasn’t until I moved back to the UK in 2013 that I really got stuck in, hitting the ground running with Monkey Toast UK. Since then I have trained with Hoopla, UCB & The F.A to name a few.

The copy for the show is” Strap in & strap on for a spicy drag king cabaret romp & come on a journey with Basvegas’s – barrow boy – Brent Would! Because he would anything…especially you! Each show is different as Brent takes you from being woed by him to being wed to him. An insight into the lurid & desire filled mind of a drag king with a perpetual wood, who longs to get it right? but so often gets it wrong. This Essex lad’s love of music has led him to write some original sexy pieces and he will even improv some for you, using your suggestions. At the point of climax there’s a game show – where you can win a date with the man himself. Score! Willing participants only – consent is sexy…just like you!”

I am looking forward to hitting a personal and professional landmark and finally putting my head above the parapet fully, even though it is terrifying. I am also very excited to give people a proper good laugh and a riotous clowning drag experience, as we need to laugh more than ever at the moment. Lastly, I am gagging to give out little badges with Brent’s sexy mug all over them.

What is the best things about performing on stage? What do you love about it and why?

The best thing for me is being able to live a multitude of lives all at once. I have often felt that I wouldn’t have enough time to be all of the people that I wished to be and this is my passport to that. Also the joy of making people laugh and/or of pushing boundaries and changing perceptions is almost beyond words.

I would like to see more silent and physical improv to truly make shows accessible to those who don’t speak English as a primary language. I would also love to see the effort that we are so rightly putting into creating a more diverse scene & opening it up to under-represented groups in regards to ethnicity, gender & sexuality be extended to include a push for differently abled and non-neurotypical folk. I would also love to see it become a more well know and established mainstream art form.

I am a big fan of a vocal warm up and like to get my body into the space and if I am alone I will play 8 things by myself or a rhyming game. I will push against a wall and wake my body up, ready to enter the space fully loaded.

I have heard a lot of great advice, but the best is always to just have fun. I trust myself that I have a good enough sense of my own politics and boundaries that I won’t do anything horrific in the moment and that if I ever erred that there are good folk around me who would have honest conversations with me. As such I can just let go and get into, and because of me being a non-neurotypical queer women, I can tackle things and draw light into darkened corners lightly pushing at the edges.