Do you want something to do this weekend in London? Well how about a show that will show you 101 sketches in 50 minutes? No, it is not a Disney Dalmations knock off but it is a show that will keep you on your seat and wanting more. I caught up with the Scribbling Ape guys to find out all about it. 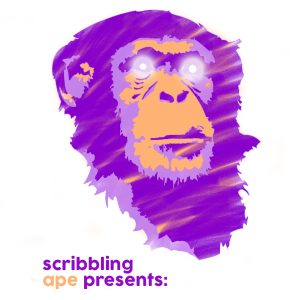 Hello tell us all about who you all are and three unknown facts!

Well to start there’s us, Ziggy Ross & Troy Hewitt, the founders of this here rabble. Long term friends and collaborators. Then we’ve got the frolicsome Libby Rodliffe and the ever mischievous Tallulah Bond. Three unknown facts? Salvador Dali designed the Chuppa chups (lollipop) logo. Every time you lick a stamp you’re consuming 1/10th of a calorie. According to Genesis 1:20-22, the chicken came before the egg.

How did your group form?

Troy and I met on the very first day of University, he was wearing a polka dot sweater and I was wearing a hoody with graffiti all over it. From seemingly different worlds on the outside, but – in a cosmic sense – closer than a proton and an electron dancing the merengue inside a stunted, sweaty atom. A back and forth began that day, and developed into a thingamabob of perpetual creation. Be it good, bad, or down right stupid, we became addicted to making things up together. So we decided to do something with that, and formed The Scribbling Ape in our final year. Taking our first play: A Glorious Chrome Yellow (a deadly serious drama about Vincent van Gogh and Paul Gauguin) to Bristol for a short, but successful run.

Unfortunately after that we were pulled apart for a couple of years, only to reform in 2017. But since then we have gone from strength to strength; recently jazzed up by the arrival of the two extremely talented ladies. These two sassy asteroids smashed into our rehearsals rooms, then propelled us to the Edinburgh fringe and back again. Libby we had known since uni, and just had to get her involved because she is categorically ridiculous, and Tallulah went through a highly rigorous audition process –  pointless really as we could have cast her straight away, she has that special something that makes you go: “I should be pickling something, I don’t know what, but someone get me a jar and some vinegar RIGHT NOW!!”

How did you come up with the name of your group? Was it difficult?

The name was difficult yeah. I think it always is, unless you’re very lucky. This is something we intend to do forever, so it’s like naming a child really. We went through loads of options, some were awful, like: Dwarven Cannon. Others we still quite like, such as: The Smokin’ Jerks. We eventually rested on The Scribbling Ape because we thought it a palpable image to represent the nature of our collective consciousness. Simple really… don’t know why it took us so long.

Well, we’ve always loved sketch comedy, but as with our previous show “The Meat Within”, we wanted to do something a bit different within the genre, something that would catch people off guard, but also challenge us as writers and performers. Initially for this one, we considered, a deeply dramatic tragedy sketch show. 1 hour, no jokes, just dolor and anguish. Unsurprisingly we benched that. Then we thought, how about a ludicrous number of sketches?

Initially we wanted 365, one for every day of the year, however, that would have been 6 seconds a sketch, and even though we do have sketches which are that short, it would have been difficult to sustain for a whole show. So we settled for one for every Dalmatian. Still a world record – as far as we can tell.

How did you get into comedy?

Well, we both grew up with similar comic hero’s. But I think it was watching my nan’s ‘Young One’s’ videos when I was a wee child, yeah that’s where it really started I believe. They all had such defined, memorable personas, each one just as instrumental to whatever preposterous plot was on the go at the time. I adored the capricious, intermittent skits, which often had no relation to the main narrative.

Looking back I can see it was the pure unadulterated whim of the writer – a rare thing – but as a child it was just another part of the show, perhaps evidence that our creative nature’s are under constant threat of erosion. So stay inside… defend your mind from the wind and rain of societal conditioning, or something like that. Anyway… low and behold, upon meeting Troy, I found it was a similar story for him! Come to think of it, I don’t know anybody else who had who had that sort of connection to those four loveable ne’er-do-wells . So I’d say that show had a profound effect on our young impressionable minds. A stark reminder that making bizarre, seemingly nonsensical, silly… sh*t, is just as important as… nuclear physics say.

The show, yes. Well, it’s 101 sketches in 50 minutes. If that doesn’t get bums on seats I don’t know what will… um, maybe this… it’s a brain boggling maelstrom of gags that strike with the precision of a scorpions tail and sparkle with the flavours of aurora borealis? There’s is a sketch about a slug? The show is the manifestation of 9 years of friendship, observations, and… titting about. Content wise; think somewhere between Dr Seuss and A Clockwork Orange. Also, IT’S A BLOODY WORLD RECORD.

I like to write my idea on a little snippet of paper and fasten it to a Cobra, Ziggy does the same and then we make them fight. Whichever wins is the one that goes in the show. Unfortunately, this technique is dependent upon snake availability, so we often settle for Hamsters- but then, they’re too lazy to deliver any meaningful ruckus… we’ve tried all sorts… wasps are tricky to fasten the idea onto, local children have parents who get in the way… We’ve even tried fighting each other but that doesn’t work because our fists join forces and turn against us, sensing that we work better as a team. I don’t know if we have a specific process, not one which can be put into words anyway… it’s just a lot of panting and honking until sentences eventually form. Its organic.

Libby and Talullah are each required to smash 15 kilograms of limestone and shovel it into a hessian sack before every performance. This helps to get their blood pumping and also keeps our sponsors down at BarrowField Aggregate Supplies very happy indeed! Ziggy and I meditate.

What sketch artists inspire you?

The League of Gentlemen are a particular favourite because of how they married the sketch genre with a broader narrative- they’re also very silly which appeals to us both. Other groups that spring to mind include the team behind BIG TRAIN, Python (of course) and Key and Peele. On a personal note I quite enjoy Tim and Eric and their “anti-sketch” approach to writing and I will always have a soft spot for Harry Enfield.

If people want to find about more about you, where can they find you on social media?

We keep a residence at Zuckerberg’s estate, our address is www.facebook.com/TheScribblingApe

And finally in 3 words why should people come and see the show?

“Manic, magical, masterful” … actually not our words, but the words of Icelandic megastar comedian (and Mock the Week contestant to boot!) Ari Eldjarn following our performance in Edinburgh this year!