Welcome to a brand new feature where we look at new singles coming onto the music scene. Today we look at the latest single by Veronica Fusaro – Lie To Me 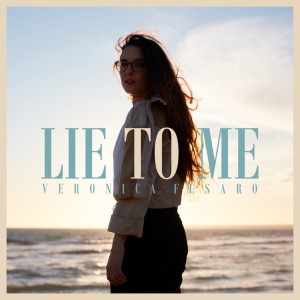 As soon as the song starts the listener is welcome with the voice of Veronica which has an element of soft and husky to it which reminds you of songs from a hazy summer day. The vocals are backed by very suttle acoustic electric guitar sound which creates a song that oozes in a soulful vibe.

The song is quite a medium tempo but that goes well with the tone of the lyrics and feels like a sort of love song in the relaxed tones. Veronica describes that the song was inspired by ‘a Friday night out, but talks about much more than just a weekend. It addresses the rapidity of the world we live in and our desperate cry to find real emotions.”

If you listen to the undertones of the musical melody it really feels like these inspirations are addressed as it is slow paced but emotional. The lyrics ‘something is telling me that you’re my escape’ are simple yet poetic and really heightens the bittersweet lyrics of this song. The second verse is welcomed with lyrics such as ‘there’s something bout your face, let me frame it just in case that you disappear’  Are pure of emotion and when sung in the style of Veronica you can feel them emphasised.

The musical set up of this song really reflects the lyrics in this song, the drum is a subtle yet chilled out beat that really creates a fantastic rhythm for the lyrics to lean against. As the song works towards the end strings are introduced and create a wonderful world that really will be pleasant to your ears.

Lie To Me is a real summer track, it is one that you can really chill out to on a hot summers day.

Listen to if you like: Ed Sheeran, George Ezra, She and Him, Amy Winehouse, Paloma Faith, Corinne Bailey Rae

One thought on “The Single Sessions – Lie To Me, Veronica Fusaro”