This weeks show is a dream to watch because it really does take you to the most interesting places! This week, Dreamweaver Quartet are headlining the show at The Miller Pub in London Bridge with their musical fun filled improv show! To find out more about it and to talk everything about dreams, I caught up with the troupe.

Hello everyone! So, who are Dreamweaver Quartet?

Francesca Reid: We are James Witt, Greg Birks, Rhiannon Vivian, James Whittaker & Francesca Reid. With the divine musical stylings of the fabulous Fraser Parry. We have played with each other in an array of guises over the years, but this is our collective-musically-off-the-cuff-quixotic baby that we are rearing together.

James Witt : We are a collective who perform an improvised comedy show with songs based on the dreams on a randomly selected audience member.

How did Dreamweaver Quartet come about?

Francesca Reid: We had been looking for the correct vessel to sail our collective passions and talents of non-liner storytelling, musical improv and the surreal and sublime. So when The Nursery were asking for submissions for the Originals series, we decided to put pen to paper and make this more than a pipe dream and it has continued to grow and develop.

James Witt : Whenever I’ve been away from improv for an extended amount of time I tend to have very vivd / lucid dreams about performing in improv shows. But we have Minority Report style screens from which 3D props appear (like in Willy Wonka). I think that may have been one of my original sparks of inspiration for the show.

Fran: We had played with each other in various other teams and when we were all looking for new creative challenges and a slight shift in direction, we knew the people we wanted to go on that journey with already – so we were very lucky.

James Witt: We get all our audience members to summarise their strangest or most memorable dream onto postcards. We then place all 40-50 dreams into a box and ask three random audience members to pluck out three. The audience then decide which dream they’d like to see made into a show. At this point we get the dreamer on stage to interview them about their waking and sleeping life. We then use this to “recreate” their dream on stage with sketches, songs, dance routines, surreal skits and other oddities you find in the dream realm. At the bows we make sure that the plucky audience member gets the biggest round of applause of the entire evening.

What is the weirdest dream you have had on the show so far and why?

James Witt: Every one has their own unique appeal for this category. So I’ll have to mention the ones I can remember.

Lucy had a gigantic big toe the size of her head. Sandra battled trolls on top of a mountain. Peter’s dad gave him a giant man-eating spider for his birthday. Sten did cocaine with the prime minister of Estonia. Leif grew limbs made of cheese strings. Manisha’s childhood council estate in Dudley was overrun with wolves who she told to f*** off and go. Deborah murdered a home intruder and covered them in manure. Chris cried so many tears they almost drowned him. Mia had tea with The Queen. And in episode one of our podcast features Dan who was stood next to a bear urinating at a urinal in the Savannah.

You’ve just released a podcast!! tell us all about it!

We have so many unused suggestions when we record our show, it seemed a shame to let them go to waste. So we decided to use them to inspire episodes of our podcast. We launched last week and the episodes will be going out every Wednesday over five weeks. We’re calling them Dreamweaver Wednesdays. The second episode features Brendan Way from Duck Duck Goose and Dead Drunk Detective (with which we share a producer…the most excellent Katharine Kerr of Podcast Pioneers who also produces the brilliant Sketch Please podcast.)

If you’ve had a weird dream you’d like us to use in the podcast then please emailmail@podcastpioneers.com with the subject line ‘Dreamweaver’

What improv styles do you want to see more of this year and why?

Rhiannon: I’d love to see more loose styles. Structure is key in learning and also in the formatting of heavy genre shows but freeform or no form is very fun to play around with. As experienced players we naturally reincorporate things and find themes to jump on, so it never needs to look messy. And there’s a lovely freedom to it. 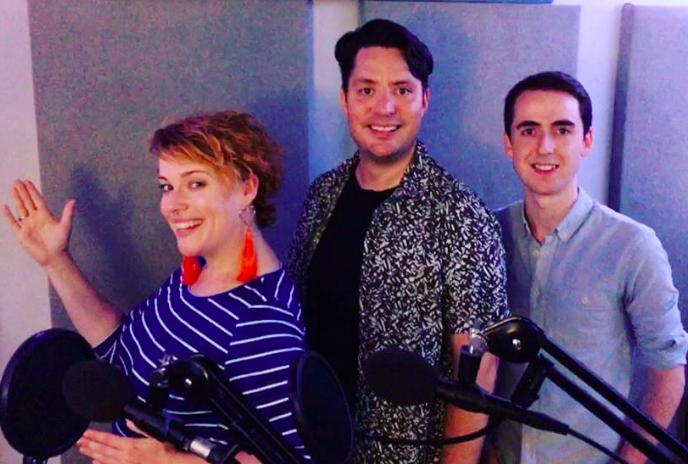 Spring is just around the corner – what are you going to do to ‘spring clean’ your improv?

Rhiannon: Watch more improv and do more improv with new teachers. As improvisers (or anyone really) you never stop learning. That’s why no matter how many hours of improv under your belt, you should never say no to taking a class with a teacher from out of town, or simply someone you’ve never worked with before. It really keeps your technique fresh, gives you ideas for the stage and (sorry if this sounds cliched) keeps you humble! The moment you think you know it all, is the moment you fall!

What advice would you give for people thinking about starting an improv troupe themselves?

Rhiannon: Like one another! Form a group with people whose playing style you like, yes. But fore mostly form a group with people who you like and are your mates. You’ll actually want to meet up and rehearse and get a pint afterwards. And it also makes you work harder at keeping the group going. Talk openly about your goals and wishes too. And don’t rule out a group therapist if you’ve been going for a very long time! The Maydays do this and its one of the reason’s we’ve weathered our storms, be they personal or professional. And honesty with a moderator is key. Without one and you’re in danger of things becoming like a bad day in the Untucked Lounge (yeah we’re Rupaul fans…)

What is the best thing about a night for the audience?

James Witt: We’ll let the audience speak for themselves for this one. Here are some reviews from our facebook and instagram accounts…

Dee Dee Haas “It was fabulous! The sheer perfection of the evening is difficult to put into words – so privileged to have been in the audience. Time always stands still when one watches one of the dreams come to life.”

Jennifer Josefy : “Hilarious!! Prepare to laugh your face off and be amazed by intricate and witty lyrics and harmonies generated out of thin air. Great night out!”

Joe Löwe : “Truly one of the most awe-inspiring acts ever to grace a stage on this earth. So great that I just HAD to write a review. The voices, the harmonies, the way they pay attention to every detail of their chosen person’s dream and their everyday life to create such a unique show. Myself and my friend were left awestruck.”

What is the strangest thing you’ve ever eaten?

Fraser Parry: My housemate once made cookies using ground crickets instead of flour. They weren’t bad at all. Bit crumbly.

If you could trade lives with anyone for a day who would it be and why?

Fran: I would swap lives with the crew at NorthCoast – as I love New York City and would love to have a go at their format on home turf!

James: I think I agree with this. If you’re in Manhattan I implore you to go and watch North Coast. they’re insanely talented.

If you could paint anything what would you paint?

Fran: I would love to paint a painting of our cast, but Bob Ross style all chilled and broad strokes!

James: A graffiti mural in the style of Jim’ll Paint It featuring all the elements of every dream we’ve ever turned into a show and we’d keep adding to it.

What is the most delightful word you can think of?

James: “The Impossible Dream” from Man of La Mancha

Who is your comedy hero and why?

Fran:  love all of the cast, crew and writers of Green Wing – pure surreal genius!

What is your favourite movie quote?

Fran: L’oncle Irvin: (after Krank’s latest failiure) Who stole the child’s dreams? Krank, in his evil schemes. But the happy tale had a sting in it’s tail. The genius has a fit of pique, hear the genius shriek, the ‘genius’ is up a creek. The City of Lost Children (1995)

James: Stephane Miroux: Tonight I’ll show you how dreams are prepared… love, friendships, relationships. All those ships. The Science of Sleep (2007)

Who is your favourite cartoon character and why?

Fran: You can’t really call it a cartoon, but it is animated . . . we love Amethyst, from Steven Universe, she is a body-posi badass!

James: Currently all the Spideys featured in Spider-Man: Into the Spider-Verse (2018) but Chihiro / Sen in Spirited Away is definitely my favourite animated character in a movie