Taste of States At Christmas – This Week – Cupcake Stuffed Turkey

Welcome To Taste of States a place where we celebrate the weird and wonderful food of the United States of America. This can be everything from the snacks that are available for a limited time to the foods that are classic traditions at events such as Christmas and Thanksgiving! Each week we will explore the facts and the history surrounding a different food. Over the next few weeks with the run up to Christmas, we thought we would do a special edition for this article as there are so much fun things to talk about at this time of year! 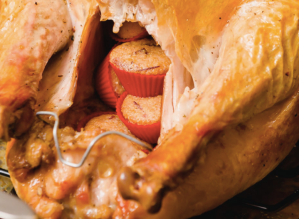 Out of all the unusual things that I have read about food at Christmas and Thanksgiving, I think that this is one of the most bizarre that I have come across. I think we should first mention that stuffing usually in the States is different to the UK as it does not have sausage meat in it – however this version of ‘stuffing’ is still really random.

One person online wrote a recipe for stuffing a turkey with an array of cupcakes when you cook it. The cupcakes are cooked separately (and the cook recommends cranberry flavour )  and then you stuff them inside the turkey to infuse it with the flavour whilst it is cooking. Apparently you can fit 13 cupcakes into an average turkey.

The original idea is from a cupcake bakery who got the inspiration from her father but just imagine the flavour of the cupcakes and how they will taste after going in a turkey and surely putting cupcakes in raw poultry makes them inedible right?