Welcome To Taste of States a place where we celebrate the weird and wonderful food of the United States of America. This can be everything from the snacks that are available for a limited time to the foods that are classic traditions at events such as Christmas and Thanksgiving! Each week we will explore the facts and the history surrounding a different food. 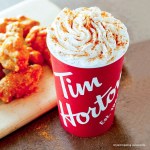 It is not unusual for America to put weird and wonderful flavourings in their drink but I don’t think anything comes as close to bizarre as this drink that was released by Tim Hortons. Now, let me first state that Tim Hrtons is a Canadian fast food chain, however, this particular flavour was added initially at their branch in upstate New York City as a limited edition to their menu in 2017.

The Latte is exactly what it says on the box, it is a coffee with Buffalo sauce added to it. The drink consists of freshly brewed espresso that has been mixed with steamed milk, and mocha. A buffalo sauce flavour syrup is then added to the coffee and it is then topped with whipped cream and a dust of buffalo flavoured sprinkles which are said to be zesty. The drink could be bought for $2.79.

The drinks were released as part of a celebration of their new ranges of lattes that were available in their shops. They also released a number of familiar flavours such as Pumpkin Spice but it was the Buffalo flavoured on that really made the headlines.  It may not be the way you normally have your coffee but at least you can say it is different and unique!