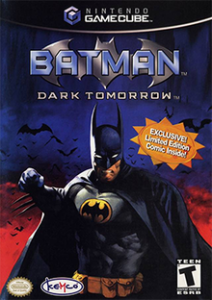 It was not the first computer game about this iconic DC character and it most certainly was not the last – it is however a game that people may remember due to the reception and reviews that were based around it. Today we look at the computer game Batman:Dark Tomorrow.

Batman: Dark Tomorrow was released in 2003 on the Gamecube, it was an Action Adventure game that was published by Kemco and developed by HotGen. The main concept of the game is that the player plays as Batman and they fight crime around Gotham City.

The plot is predominantly based around Batman trying to stop a gang war between Scarface and the Ventriloquist and Black Mask. Throughout the game Batman has to fight a number of villains including Poison Ivy, Mr Freeze and the Joker.

Throughout the game you use a variety of weapons and different modes of transport to travel around Gotham. Every level has a certain objective that you have to complete in order to progress through the game.

The game was developed over four years and was set to not just be released on the Gamecube and the Xbox but also the Playstation 2 as well. Unfortunately though the Playstation version got cancelled.

The game overall received a lot of negative reviews and this is how the game sort of went down as a known one in history. It was criticized for its repetitive missions, a frustrating camera that was hard to play with and a lot of bugs that faltered the gaming experience. The one thing that the game was praised for was the cinematic cut scenes as they stuck to the dynamics of the DC based Batman Universe and brought it to life.