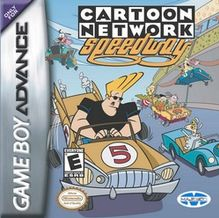 Today we look at a game that was released on Gameboy Advance and was welcomed with a lot of negative reviews – Cartoon Network Speedway. The game was released in 2003 and was developed by DC studios and published by Majesco Entertainment. The game was similar in the concept of games such as Crash Team Racing and Mario Kart that it was a racing game where you would compete against other members of the Cartoon Network Universe such as Johnny Bravo, Cow, Chicken and Swanky.

There are many locations that you can race in either as a single race or as a championship this includes Farm Frolics, The Big City, Desert Drive and Construction Derby. Throughout the game there are many trophies you can win as well as characters that you can unlock.

So why did a game with such iconic characters get such a negative review? Well, according to critics, it was one of the sloppiest and most generic racing games of all time. It apparently had bad graphics and a very slow pace. Cartoon Network fans got agitated because you couldn’t play as the Powerpuff Girls or Dexter which are some of their most iconic characters.