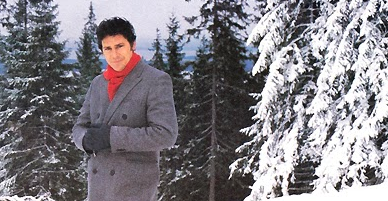 ​If there is one thing that I love in December its the songs! Yes we hear them every year, yes we hear them all too much but YES they are the spirit of Christmas. As soon as  the calandar strikes the first of December the Christmas music comes on (so when you are reading this I will probably be somewhere in London bopping my head along to a Christmas Classic and the other commuters will be none the wiser!).

One of my housemates back at University loveddddddd Christmas – I cannot even emphasise by how much! In Septmber he would put Mariah Careys Christmas album on repeat and we would hear that non stop until the Christmas Holidays – thats how much! There are some classics I love and then there are ones that annoy me and I get bored of listening to every year. I am not a fan of songs like Lonley This Christmas by Mud  or Santa is Coming To Town the Jackson 5  version. However there are others that absolutely adore.

So today, lets look at some of my favourite Christmas songs and my reasons around this.

I really like this song even though the lyrics are probably depressing – i really like the guitar riffs as they are really oozing of Christmas and I love listening to it at this time of year and wish it was played a lot more around the festive season.

All I Want For Christmas – Zebrahead

Everyone likes this classic Christmas song by Mariah Carey, but I like Zebraheads version because it is very up tempo and catchy. Also this is the most over played Christmas song so its only right to hear it as different versions.

It is always nice to have new and interesting twists on the season of Christmas and this is one of the songs that I have started to like a lot in recent years. I like this song because even though the lyrics are depressing the music is really uplifting and jolly.

I love this Christmas song and it is probably one of my all time favourite christmas songs. You know how Carlton from Prince of Bel Air dances to Tom Jones songs? Well thats what I go like when this song comes on – i do it to be silly and an idiot but it never fails to make someone laugh – especially as I make sure I have a cheesey grin too!

I have always likes this song, I have no strong particular reason why but I have always been a fan and really like the style of this song and the fun involved.