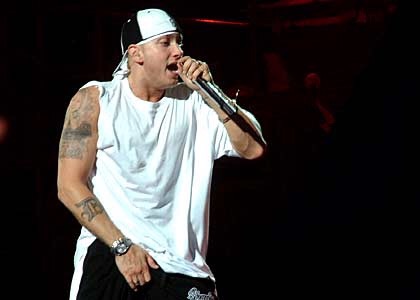 Have you ever wanted To listen to a new band or musician and not sure where to start? Well, instead of listening to their commercial music, why not start with something off the record first! This week we talk about a rapper who made a huge impression on the world – Eminem

In his career then this is a song you Need to listen to. Yes the lyrics are very strong but the music and tempo of track make this song powerful and really defines the unique sound Eminem was bringing – even when he offended many.

This song is hands down highly addictive – the chorus is very easyTo start liking and the song has a great musical composition. It had a comical feel to it and it’s something that will ease you into Eminem if you are not familiar with his music.

This song also has a bit of a comical feel to it and this is emphasised with the fact that his daughter Hallie who was very young at the time songs along in the chorus. If you are not a fan of his rapping and his lyrics then you may like this one as it’s about subtle and you will be won over by his daughter singing throughout.

AIt’s so hard to choose an album track on this one because there was a lot of singles – however saying that, this song is a good one to of chosen as yet again it connotes his comical side and is definitely one of the most fun on Encore.

This may not be an album track, but it’s really worth highlighting if you are trying to get into Eminems music as it really highlights another area of Slim Shady you may not be aware of. It’s a really nice song with a lovely melody and chorus that it’s hard to put down once you listen to it.

This is another song that was technically a single but it has to be highlighted just to prove and portray just how talented Eminem is. One listen to this and you will be astounded just to how many lyrics

One person can fit into a song without a lot of breathing space. It’s a phenomenal song and is worth a listen.