This was a different week for improv then what you are used to reading because this week i didn’t go to the drop ins or a lesson, instead we lead the way and had our first proper meeting as a new improv troupe. 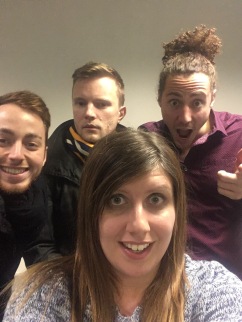 This is only 4 of us there 4 more people missing from this photo!

There was one a few weeks ago but I couldn’t make it due to my wonderful train service being on strike however a lot of people couldn’t make is so ce la vie. Before we even got into the room, we even gained a new troupe member – the drop in that I usually go to was cancelled last minute and I bumped into a friend of mine i haven’t seen in a few months and invited him to come along. He ended up getting on really well with the rest of the troupe and got on with the games that we recruited him.

It was great to be with the old team back from the lessons with Stephan and the energy that we all had in the lessons was back on top form in a matter of minutes. For the first meeting we decided to go through all the list of games that we have and seeing what ones work, how we can give them a twist and what alterations we need to make if we were to perform them on stage.

One of the style of games that we ended up testing was short games focussed on word dubbing. These are a style of games where some members of the group will talk in a nonsense language and then other members of the group will then translate to the audience what they say whilst pimping up the gibberish players making them sound like they have said silly things or making them do stupid tasks.

We did a variety of short form games with this style and once we had added our own tweaks, twists and turns, they worked really well! We also tried some other games that we all wanted to test and also ones that we have not seen performed on stage before and they worked well and have potential to go further!

We also had a look at some of our old favourites from the lessons that we did, for example The Alphabet Game. It is such a fun game to play and so many people do in the short form genre, it is also a game that audiences really enjoy watching it. Instead of playing the quick fire game that we did with Stephan we started with the version that we used to play in The Rat Race in Newcastle and then from playing that version for a while we then developed it into something better and more fun to play and as an audience looked like a lot of fun to be a part of.

We had a look at the theme of emotion as well and played a few varieties of games that were based on changing emotions and elevating them to the next level when we were either using different objects or changing them at different parts of the scene. Emotion scenes work really well for both the audience and the group as it can be quite amusing seeing how troupe members change and how they have to react and change to it depending on the scenario.

This week was really fun and it was really nice to have the old team back together as well as gaining new members that worked well. We are not sure when the next practise is going to be but there will def be more improv next week! 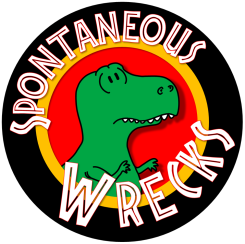 If there is one group that is fantastic at doing games with gibberish dubbing, it is the Newcastle based improv troupe, Spontaneous Wrecks. As part of their show, they have a section where they have a member of their troupe come up on stage and the audience decide what made up country / or real country this person is from and then that person starts talking gibberish and acting out things whilst the person at the front of the stage “narrates” what the gibberish person is saying.

Any member of the troupe can play this game, and if you have regular audience members then it is great fun to mix it up as every member will play it differently and will entertain the audience in a different way.