A Blackpool Murder Comedy is coming to TV 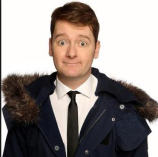 It was announced yesterday that Jason Cook, the writer of the hit comedy show Hebburn, is currently writing a murder mystery for the television channel Gold.

The show is set to be called Murder on the BlackPool Express and is a two part series about a guided tour coach trip in Blackpool. It centers around coach driver Terry who starts to investigate why his passengers keep dying.

The cast or the release date has not been announced but we predict it will hit our screens in 2017.