Ricky Gervais and Stephan Merchant met Karl when they made their epic return to XFM and were given Pilkington as their producer. Originally, Karl used to just solely produce their show only participating now and again when Ricky would ask him a view on something. From finding out how funny of absurd some his comments are, they started to make him a regular guest and feature of the show. This lead to hilarious outcomes, reactions from Ricky and Steve, features and results. When the duo of Ricky and Steve decided to leave XFM, they started the Ricky Gervais Show podcast and their popularity began to increase even more.

If you haven’t listened to The Ricky Gervais Show podcasts before, then you are in for a treat. There are 5 seasons of podcasts and each episode has its golden gems. It was originally created as a podcast so that they had more control over what they spoke about. They approached The Guardian Newspaper with the idea and they took the project on initially and the first 12 podcasts were free via the Guardians websites.

If you want to listen to a podcast that will make you belly laugh out loud a lot then this is the podcast you have to download if you haven’t before. If it is not Karl Pilkington comments that make you laugh then it will be Ricky Gervais laugh or Karl picking on Stephan Merchant that will cause you to break down in laughter tears.

The podcast has a number of different features, some are fantastic and some fall flat on their face, but the ones that fail are usually hilarious too as they tend to blame Karl for it and end up having an argument.

Some of the successful ones are Monkey News – Weekly information about what is happening with monkeys in the news and Educating Ricky – Where Karl will have to learn about a subject and teach Ricky about what he found out. The best feature of them all is Karls Diary – he started a diary between the break of the podcasts and each episode, Stephan will read out inserts with hilarious results. They can include anything from talking about walking around a grave yard as a tradition on holiday with his girlfriend, to trying to stop an insect fight. The worst feature is something called Rockbusters, a  spin-off of the TV show Blockbusters, but the clues that Karl gives are long winded and make no sense that it ends up with Ricky and Steve having an argument with Karl. 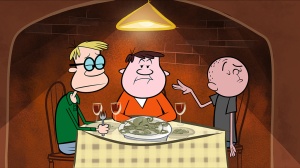 The podcasts were so successful that it was made into an animated series for HBO and Channel 4 in 2010, so if you fancy watching the stories visually then I recommend watching this. The shows can be bought via itunes or also available on Youtube.

I would really recommend this podcast as it really is a golden gem of comedy and hilarity. If you have already listened to this podcast then maybe re-listen to it all just for a giggle and relive some of those classic ‘karl-isms’. If you want to listen to more of the Ricky, Karl and Steve adventures then youtube the Ricky Gervais XFM radio show as they are on there and some of them are very funny. If you search for Karl vs Steve, and White Van Man Karl, then trust me, those videos are guaranteed to make you laugh.