The Magic Of The Music Video! – Britney Spears Month – Stronger

This month we are looking at a pop star that growing up I would see a lot of their videos as they were on constant repeat on the music channels. I like Britney Spears music but her video were something that amazed me, I have talked about this time and time again on here that America always looked like this amazing place that was million a miles away that was so different to the UK. I found American Pop stars and bands music sort of had this impact and effect on me that it made me wish I lived in America as I always thought life would be perfect if I lived there. These music videos by American stars sort of had the Hollywood effect on me and hypnotised me.

There are so many music videos by Britney that are legendary and there are a few I have seen so many times that growing up they definitely had an impact on my editing and what I wanted from life – so lets have a look at them this month!

When I was thinking of what Britney videos I should take a look at, this one solidly stood out in my head because I remember parts  of the video really strongly. The dance routine with the chair really always stood out to me because it so well choreographed also because it is such a different style of video for Britney and for that I have always really liked it.

A futuristic world where Britney walks into a club, breaks up with her cheating boyfriend and there is a lot of dancing with a chair. 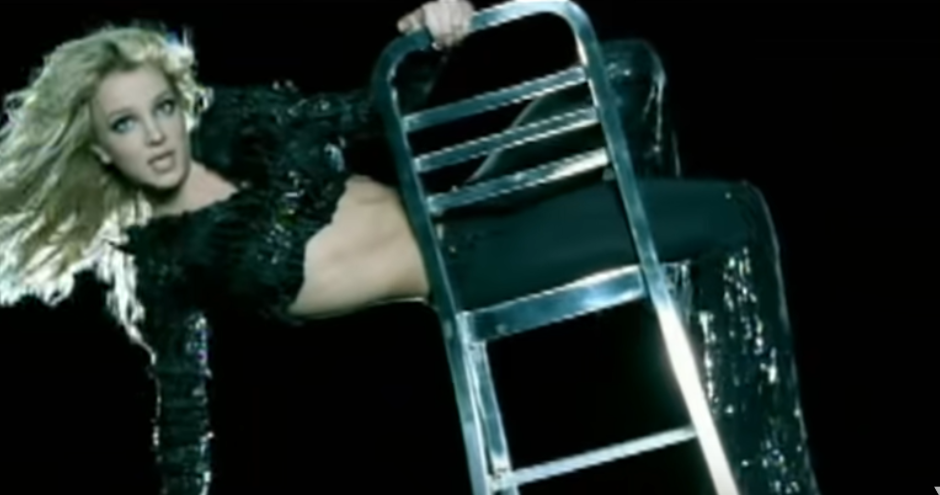 The one thing that I have always loved about this video is the way that it is portrayed that every action that Britney makes with the chair manipulates what happens in the club – the editing to bring this ideology to life is really clever and it has so much power in the simple shots that it is so powerful. This is one thing that always stood out to me in this video as I always thought it was a very clever technique and metaphor.

The soft focus, lighting and color grade on the close up shots of Britney is also another set of shots that are interesting because it feels again they create this element of innocence that is prominent in all Britney music videos. The colour grade just like Everytime it has a hint of green again to I think connote again that element of darkness that sort of surfaces in the metaphorical undertones.

This video does something that I love about pop music videos and that is edit on the beat, there are some fantastic editing cuts throughout that hit the beat on the verses which create this dramatic moment in the dancing that Britney is doing and it makes the song even more powerful.

We have to talk about the scenes with the car and the lightning, there are so many fast edits with motion blur to create this really dramatic situation of Britney heading off on her own into the unknown and again it feels to me that it follows a similarity to Toxic. There are really unusual transitions that take the different pieces of the car and uses them as a transition to create drama and this fast pace change that we are seeing in the music star. The most interesting one is the 360 turn with the wing mirror – it is hard to explain, I would just watch the video to see what I mean.

Categories: Music, Music Feature, The Magic Of The Music Video