The Magic Of The Music Video! – Britney Spears Month – Born To Make You Happy

This month we are looking at a pop star that growing up I would see a lot of their videos as they were on constant repeat on the music channels. I like Britney Spears music but her video were something that amazed me, I have talked about this time and time again on here that America always looked like this amazing place that was million a miles away that was so different to the UK. I found American Pop stars and bands music sort of had this impact and effect on me that it made me wish I lived in America as I always thought life would be perfect if I lived there. These music videos by American stars sort of had the Hollywood effect on me and hypnotised me.

There are so many music videos by Britney that are legendary and there are a few I have seen so many times that growing up they definitely had an impact on my editing and what I wanted from life – so lets have a look at them this month!

I had this song on a VHS I got from TV hits and I would watch this music video so many times so I know it very very well and it would be foolish for me not to include it.  Not my favorutie video bit there is a lot to discuss

Britney is dreaming about her thoughts and her emotions she is thinking are expressed in song and dance.

The one thing that stands out to me watching the video back now is the jazzy transitions that are used in the video, the weirdest part is they are used to cut between the same shot which doesn’t make sense to me but I guess it was a way to make it look cool. There is inverted colour transitions, camera snapshots – the whole lot and it is very fun to watch. 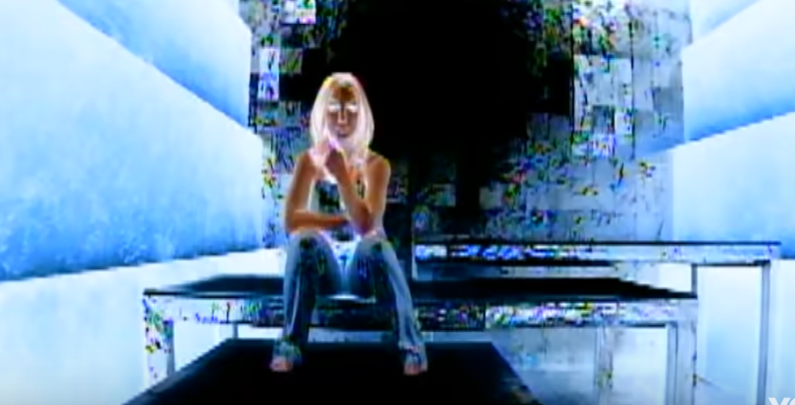 One of the transitions

We have to talk about the stage and set in which Britney is dancing in the red top and the black skirt. This part of the music video as a kid used to be the main part that used to fascinate me. The location seemed so surreal that it felt to me that it was only something that could belong in an Americans music video. I mentioned in a lot of Blink-182’s month on this feature was that when I was growing up, America seemed like this bigger and better place then the UK and it was shots like this that used to fascinate me with America – it just felt like magic. I love the pan up in this video when it is first introduced, it is simple but super effective at the same time.

The set mentioned above

There is a part of the music video where Britney sings ‘if only you were here tonight’ and the camera sort of goes to a fish eye bubble lens. This is a part of the video I have always loved as it sort of speeds up with a jittery effect. I remember this used to fascinate me so much as to how it was done and I used to love how well it went with the time of the music.

When the camera starts to speed up

Categories: Music, The Magic Of The Music Video