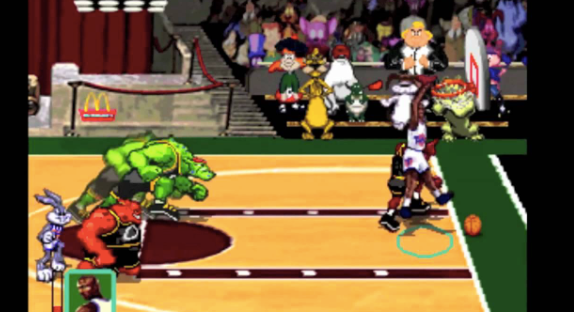 It was a huge film in the nineties and it was also turned into a computer game as well. Space Jam was released onto the Playstation one in October of 1996. It was developed by Sculptured Software and published by Acclaim Entertainment.

The computer game did not follow the regular rules of basketball and instead had its own where you only have three people on each side. You have a decision to play as either the TuneSquad or the bad guys, the monsters. In a nutshell the aim of the game is to play a number of basketball games in a wacky and fun way similar to the film. There are also a number of mini games as well that you can play in between the quarters.

The game sadly received a lot of negative reviews because it was too easy very simple. People were not keen on the mini games either as they were way very basic and felt outdated.

Are you doing #Brightonfringe this year and want promotion in the form of an interview? Get in touch! #improv #comedy #Brighton
❤️💞Everyday this month we are looking at a different song and why we love it! Well, it is valentines day month. ❤️💞 . . 🎶 Day 21 - There Is - Box Car Racer 🎶 . . Find out why this song made the list by clicking Link in bio 💌💋 . . . #music #love #February #band #valentines #valentines_day #tomdelonge #boxcarracer #bcr #ava #avamovement #blink182 #song #bands #musician #thereis #gif #bands #travisbarker
This month we celebrate the music videos of Alkaline Trio . . .. The Magic Of The #Music Video! - Alkaline Trio Month - Help Me ... . Link in bio . . #alkalinetrio #mattskiba #danadriano #band #music #musicvideo #musicians #bands #videoediting #helpme #editing #videoedits #inspiration #steampunk
⭐️ The Phoenix Remix Live! ⭐️ Tuesday 10th #March raising money for the Douglas Bader Foundation Meet THE CARETAKERS @caretakerscomedy Find out more information about the other acts that are performing here: https://www.facebook.com/events/168934561090242/ . . . #improv #london #comedy #phoenixremixlive #charity #fundraiser #live #londonbynight