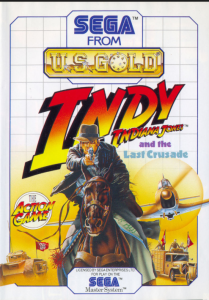 Today we look at a game that was released on a number of different computer game systems and also was released around the same another game with the similar name was released. Welcome to the world of Indiana Jones and The Last Crusade: The Action Game (note the words action game, that is the key difference between the two games.)

This game was released originally in 1989 by Lucasfilm Games, it was published by U.S Gold and developed by Tiertex Design Studios. The game was based on the film and the aim of it is to go on a quest to find the Holy Grail. Along the way you must find other artefacts as well such as the Cross of Coronado, the Knight of the First Crusades Shield and the diary of your Father which explores his findings of the Grail.

The game has four levels in a 2D side scrolling format for you to explore and in these levels you have to avoid traps, climb up obstacles and solve puzzles. To fight off enemies you have Indys whip that can hit people and also you can punch and kick people too.

The game was welcomed with an array of different reviews – some praised it for its graphics and its sound that it offered the player. However, others criticised the fact that the game was very predictable ad just a very basic search and find sort of game. It was also criticised for having really easy fight sequences.