The most recent trend in the travel show is to attach a comedy to it and there are so many – some serious, some spoofs, some that are the dynamics of an actual scripted comedy and others because they were one big practical joke! Travel Thursdays have just got bigger as we are now adding a comedic spin on it where we are looking at the comedian versus the travel.

This week we look at a comedy show that is a mix of food and travel intertwined together with two comedians that we spoke about in Snowgate the other week. Add 500g of Ed Gamble, sprinkle on top a T1 diabetic and then whisk in a good splodge of James Acaster, mix it all together and you get the new online comedy show Just Puddings. 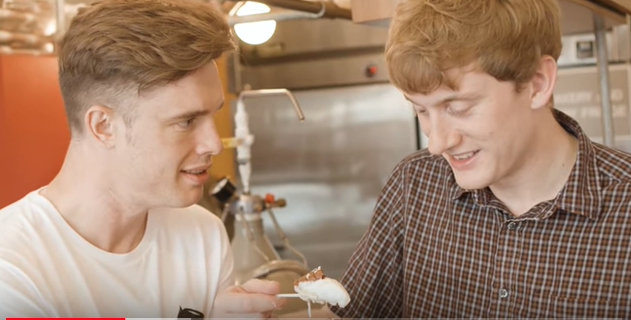 The mini webisode which is available on the Turtle Canyon Comedy Youtube channel follows comedians Ed Gamble and James Acaster travel around the UK trying puddings and deserts of restaurants with a twist. James does not have any control over what he eat instead its all down to Ed. Mr Gamble is a T1 diabetic and its Jame’s job to eat whatever pudding tickles Eds fancy on the menu.

Now Ed isn’t that soft on Jame’s he doesn’t listen to what he wants on the menu, oh no, you only need to watch the first episode to see that throughout James subtly hints about what he fancies on the menu  but NO he will not back down it is all about what HE wants.

Now, dont think of this as a show where Ed has the whip out and is constantly shoutig at James to eat what he demands, no this is a show about two friends and their ‘brotherly bond’ to in the words of Barney Stinson ‘Help another Bro out’.

If there is one thing you will do whilst watching this show is laugh at the way that it parodies the magazine style cooking show as well as laugh at the effort that is put into the description of each pudding. This show will also though give you the aww factor as you feel sorry for Ed that he cannot eat any of the food placed in front of him and imagine him as that little puppy in the window with those sad eyes that he cannot even have a lick of the indulgent sugar placed in front of him. This show is worth watching, if it does not make you laugh, then the desserts on show will make you drool and definitely a little bit hungry.