Each week, we will be taking an in depth look at some of the best sitcoms and comedy shows from both the UK and the USA.
Today we will be looking at a sitcom that ran for eleven seasons and also lost one of the funniest members of the sitcom within the first four seasons – My Family 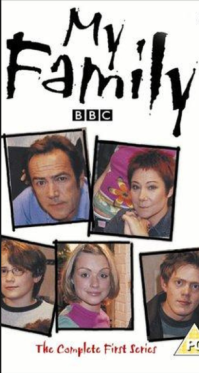 Comedy about Ben, a dentist, and his family. They don’t exactly get along well. – IMDb

+ Kris Marshall, who plays Nick, wanted to be killed off the series, but the writers decided it would be better for him to have moved away.

+ Both Robert Lindsay and Zoë Wanamaker criticised the quality of the writing in the show’s later seasons. Wanamaker revealed that they both refused to film one script because it was so poor.

+ Between the first and second series, the house design and layout change massively.

+ Kris Marshall who played Nick Harper for 5 years was 7 years older then the character he was playing. The character was 20 however Marshall was 27. He found it hard to play the character because of the age difference. The 15 year-old Janey was played by the 21-year old Daniela Denby-Ashe.
Classic Clips