If you want to listen to something a bit rocky, a bit electro, a bit dancey then 3Oh!3 may be the band that you will want to listen to today. 3oh!3 is an electronical music duo from Colorado called Sean Foreman and Nathaniel Motte.  They both are co-writers on all of the songs that they produce and have currently released 4 albums. The band is named after the area code of where they are both from, Boulder in Colorado. 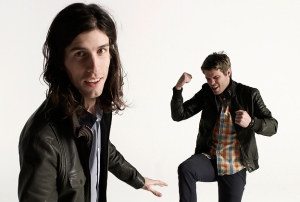 Apart from being part of the band, Sean has written songs for many artists including Lil Jon, Katy Perry, Icona Pop and Andrew W.K. He is also a World Champion Ultimate Frisbee player.  Nathaniel musically directs all their live shows. When he is not doing work for the band he is composing music for film, television and video games.

To get you into the mood for 3Oh!3 here are some of their best songs. All of their music videos are really entertaining to watch as well, so grab a cup of tea, a biscuit or two for dunking and sit back and enjoy.

You’re Going To Love This

Holler Till You pass Out