The Games That Time Forgot – Mario is Missing, Super Nintendo ﻿

​Today we look at a game that was created as part of the Mario franchise as an educational tool and was heavily criticised for its style. Today we look at the Super Nintendo Game Mario is Missing. 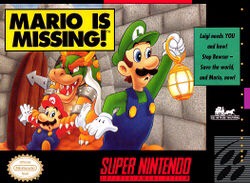 Mario is Missing was released in 1992/93 on MS-DOS, SNES and NES, it was published by Mindscape  and Nintendo. It was one of the only Mario games where Luigi takes the lead role in the game. The games story is based around Bowser planning to flood the Earth using hairdryers to melt Antartica. When Mario, Yoshi and Luigi follow him to Antartica to stop him, he captures Mario. The aim of the game is to help Luigi find him again.

In the game, Luigi has to retreive many artefacts that were stolen and place them back in the correct locations. The enemies are called Koopa Troopas and to kill them Luigi has to jump on them. The items cannot be placed in the correct locations until trivia questions are answered by the player. You have to visit many countries throughout the game including Greece, Spain, Morocco and Mexico. The original game received a lot of negative reviews from critics however others have praised it for being a really good educational game.